In digital school, no homework can be left behind

In digital school, no homework can be left behind 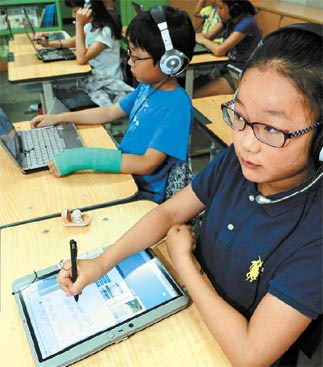 Students at Guil Elementary School in western Seoul study digital textbooks on laptops or smart devices in a class, yesterday. The school has been designated as a pilot school for the government’s “smart education” project. [NEWSIS]

Students spend more and more of their lives online these days, playing games and interacting with friends (and strangers). The next step will be slightly less fun: doing homework and studying online.

The Ministry of Education, Science and Technology said yesterday it will invest 2.2 trillion won ($2 billion) in a “Smart Education” project over the next four years, which will digitize major parts of the country’s education system, including an adoption of digital text books.

“Korean students have ranked first in terms of digital literacy among developed nations according to the OECD-run Programme for International Student Assessment,” said an official from the Education Ministry. “That’s why Korean students, who are already fully prepared for digital society, need a paradigm shift in education.”

Digitizing textbooks means moving the content online, where it can be accessed by various kinds of computers, but especially mobile devices.

“We will work with the President’s Council on Informatization Strategies and make textbooks digital. They will be accessed by computers and smart gadgets such as the iPad, Galaxy Tab and also smart TVs,” said the official.

The digital shift is expected to drastically change the scene in schools. Students will no longer trudge to class with backpacks full of textbooks. All they’ll need is a single device, like a smartphone or tablet computer.

According to the Korea Communications Commission, the number of smartphone users in Korea will reach 20 million by the end of this year. Seoul’s city government expects smart gadgets to reach more than 80 percent of its residents by 2015.

According to the Education Ministry, wireless Internet networks will be installed in all schools and a cloud computing system established by 2015. All teachers will be provided with smart gadgets, which will take up 1.2 trillion won of the total budget.

Cloud computing refers to a system in which programs and data are stored remotely on a server that can be accessed by computers or mobile devices. Students will be able to access textbooks and assignments and store reports and homework, in the “cloud.”

The ministry said digital books will be much cheaper than printed versions. Analysts say “smart education” will help isolated groups of students, including handicapped students.

“By grafting education onto state-of-the-art technology, the country’s education industry will be revitalized, while also creating jobs in the IT industry,” said an Education Ministry official.