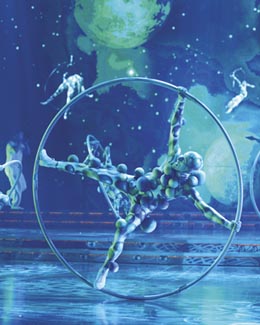 Like a cocktail with a dash of “Alice in Wonderland” and a splash of “Rocky Horror,” Cirque du Soleil’s highly acrobatic, dream-like spectacular “Zarkana” opens this week with its world premiere in New York.

In a show some have compared at times to a dream or a nightmare, a magician named Zark (played by Paul Besson) appears in a shining red suit on an abandoned theater set. With music setting the tone, gravity seems to disappear as performers rise and fly, soar and fall.

Zarkana may have a bit of something for everyone: the show boasts poetry by Erika Chen; there is speed on the “Wheel of Death” segment with brothers Ray and Rudy Navas Velez; art with its “Flags” installation; harmony in its “Rope Duet,” featuring Di Wu and Jun Guo; and sky-high jaw-droppers “High Wire” and “Trapeze.”

These are just some of the things Zark experiences as he sets out on a quest to find his lost love through a changing world inhabited by a bevy of bizarre creatures and dangerous ladies.

The high-flying tricks are nicely interwoven with Zark’s journey, as he crosses lands ruled by “Mandragora” the flower woman, “Kundalini” the snake woman and “Tarantula” the spider woman. A third character, “Pickle Lady,” is only heard and not seen.

“Zarkana was meant to be a grand acrobatic show. I would call it an acrobatic rock opera,” said Girard, 48, who is directing his second show for entertainment powerhouse Cirque du Soleil after “Zed,” which opened in Tokyo in 2008.

“Our biggest challenge was to create a show that would make the most of the [huge] scale of Radio City Music Hall,” he said.

“Everything is driven and conditioned by the scale of the theater - from the choice of the acrobatic acts and cast to the way we use video and music,” Girard explained. “Whether it’s circus, film, theater or opera, I assume that as soon as the curtain rises, the audience is open, available, ready for anything. And this premise makes perfect sense at Cirque du Soleil.”

After opening in New York, where it is to run through October, Zarkana is due to play in Madrid and Moscow.