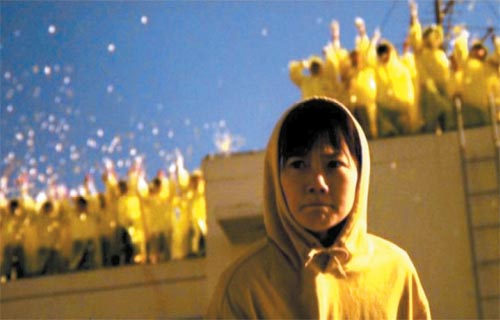 Hyeon-nam (Bae Doo-na) daydreams of the accolades she will receive for rescuing a stray poodle from a dog killer in “Barking Dogs Never Bite.” [JoongAng Ilbo]


Before “Memories of a Murder” and “The Host” made Bong Joon-ho a household name, a small, quirky gem of a film set in an apartment complex in Seoul marked the director’s auspicious debut.

Though bits of Bong’s uniquely sardonic brand of black humor can be found in his more widely-known films, it is in “Barking Dogs Never Bite” where his offbeat, darkly funny sense of humor first shone through.

The film opens with the director assuring us through subtitles that “no dogs were harmed during the making of the movie.” The rest? Let’s just say it is no party for die-hard animal lovers without a hearty sense of humor.

The story centers on three main characters - a barking dog, a burned-out college lecturer and a young bookkeeper with no real life ambitions.

Yun-ju (Lee Sung-jae) is a cowardly intellectual who reaches his boiling point when a neighbor’s loud dog disturbs his sleep. He seems to have no control over his life. His loud-mouthed, pregnant wife is a real ball buster and his goal of becoming a full-time professor seems out of reach under a corrupt academic system.

So he does the only thing that he can do. He hunts the dog down and puts him in the basement of the apartment complex, a place frequented by the building superintendent (played by the hilarious Beun Hee-bong), who enjoys eating dog meat.

But it’s the wrong dog. At this point, Hyeon-nam (Bae Doo-na), the apartment’s twentysomething administrator, enters the picture. With a tedious job by day and a foul-mouthed friend by her side at night, her sole escape from the idleness of her life is daydreaming about getting on TV by doing something heroic.

Hyeon-nam stands in stark contrast to the older generation, represented by the custodian, who have no qualms about eating dogs. For her, preserving the well-being of the creatures is her utmost duty.

When a rumor about a potential dog killer breaks out, Hyeon-nam’s inner Columbo comes out. She manages to rescue a poodle, and her 15 minutes of fame is captured on the apartment’s CCTV system. As Hyeon-nam chases the dog killer, the apartment complex serves as a sort of labyrinth, a massive modern prison where all the units and floors look the same.

One memorable scene is when Hyeon-nam and her friend get drunk and steal a random car window. It’s no elaborate kidnapping scheme but throughout their subway ride back home, the two, who have never done anything so mischievous, can’t stop grinning with glee that they actually did something “bad.”

Whenever I watch this film, I always think that this is the modern day Korea that I, as a native Korean, recognize. Whether it is the middle-aged super who has a taste for dog soup, the grandmother who dries radishes on the roof, the nervous intellectual who can’t say what he really feels or the disillusioned youth daydreaming of a courageous tomorrow, Bong paints an unsentimental, true portrait of the city and the full spectrum of urban neurosis it offers.

His observations of Korea don’t include fetishized sex, a mythologized view of kimchi or any of the other perpetually cliched “Asian” topics that many of his peers resort to. Instead, through the eloquently-placed, tragicomic events of “Barking Dogs Never Bite,” Bong showcases the ironies and complexities of the city that makes it so fascinating and endearing, even for a native of 20-plus years like myself.