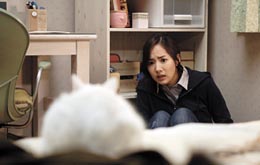 An unlikely protagonist slinks around in “The Cat,” which follows So-yeon (Park Min-young), a pet groomer who suffers from claustrophobia stemming from a childhood experience.

One day, one of So-yeon’s customers dies on the elevator, leaving her cat Bi-dan behind. The mystery of who killed the woman on the elevator is unknown, and the cat is the only witness. As the police begin their investigation, they ask So-yeon to take care of Bi-dan. But something strange happens to So-yeon from the day she brings Bi-dan home.

So-yeon starts having nightmares in which she sees a little girl who keeps coming back to haunt her dreams. Afraid and unsure of what this might mean, So-yeon starts investigating the mystery of the cat and the death of its owner when her closest friend, who has also recently gotten a cat, dies.

The film was invited to participate in the 64th Cannes Film Festival Film Market, where its distribution rights were sold to three companies in Singapore, Malaysia and Brunei.

Critics at Cannes said that the movie is scary yet fascinating and ultimately appealing. 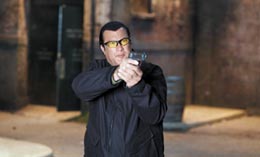 In a sign that Steven Seagal is increasingly unpopular among the masses - as if he ever was - a 13-episode television series about undercover cops unearthing scum in Seattle, starring the “Lawman” himself, was canceled and instead turned into six direct-to-DVD films.

“True Justice: Lethal Justice” is the fourth in this series. And it is getting actual silver-screen treatment in Korea, which is not necessarily a surprise considering Seagal’s older films frequently hit local cable television channels.

In this movie, Drug Enforcement Agency agent Cane (Seagal) and his team must investigate illegal activity behind a white-supremacist group that is vying to win the local elections. The group will do anything it can for its candidate to win and Seagal must stop the extremists before it’s too late.

In a side mission, Seagal and co. try to stop a recently released rapist from striking again. But when a female member of his agency gets raped, things get personal and Cane takes matters into his own hands.

The idiom goes, “Never judge a book by its cover.” Good thing this is a movie, kind of. Judge all you want before you watch.

Part love story, part postwar tragedy, with a dose of comedy thrown in, the low-budget film “Poongsan” depicts the sad reality of the division between the two Koreas.

Poongsan (Yoon Kye-sang) has the unenviable - and death-defying - job of delivering messages across the North and South Korean border to separated families.

When South Korean government agents ask him to smuggle in In-oak (Kim Kyu-ree), the lover of a high-ranking North Korean defector, into the South, the damsel and rescuer fall in love instead.

Written and co-produced by Kim Ki-duk, who just won the Prize Un Certain Regard for “Arirang” at last month’s Cannes Film Festival, and directed by his protege Jeon Jae-hong, “Poongsan” came to life on just one-tenth of the average budget for Korean films.

Poongsan, whose real name is never revealed, is a mysterious man who delivers whatever brings him money by going back and forth between Pyongyang and Seoul. One day, the delivery man is ordered to bring In-oak. She joins the deliveryman on the life threatening journey.

In the middle of this trip, In-oak and the man start to fall in love, but their romance is put in jeopardy by the obstacles they encounter. 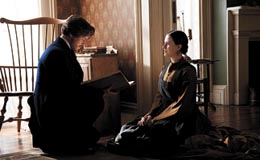 The “Conspirator” succeeds in depicting the beginning of the Reconstruction era with great historical accuracy; however, viewers may find that Redford’s drama resembles an in-class film more than an enthralling drama.

This ambitious drama captures the most compelling of human emotions in two starkly different environments: the picturesque Danish town where Anton, a Swedish doctor, lives with his son Elias, and an African refugee camp where victims of genocide seek medical help.

The film was originally released in Denmark in 2010 under the title “Hæven”-Danish for “Justice and Revenge.”

Bier attempts to demonstrate the power of raw emotion, connecting the experiences and desires of people in seemingly incomparable circumstances.

With this film, Bier has directed one of the best releases of the year. 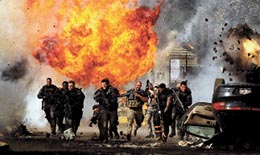 Yet another installment in the “Transformers” franchise (and almost certainly not the last), “Transformers: Dark of the Moon” will have much of the same as the first two movies: battling robots, explosions and attractive people in perilous situations. But according to an extra hidden on the Blu-ray version of the previous film, “Revenge of the Fallen,” director Michael Bay expressed his intention to make “Transformers 3” not necessarily larger than “Revenge of the Fallen,” but instead go deeper into the mythos, give it more character development and make it darker and more emotional.

The film opens with the last spacecraft to escape Cybertron, The Ark, crash landing on the dark side of the moon in the early 60s.

The crash is detected by NASA and they begin preparations to land the first man on the moon to investigate. The Chernobyl disaster is woven into the plot, there is a conspiracy theorist, betrayal and lots and lots of explosions and general mayhem.

Megan Fox fans will be disappointed to hear that she has been replaced by English actor Rosie Huntington-Whiteley. It is said that Fox likened director Michael Bay to Hitler in an interview, and that was not such a clever thing to do.