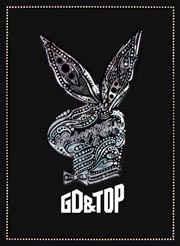 Playboy magazine of the United States has belatedly found out that GD&TOP, a K-pop duo consisting of two members from Big Bang, used its bunny logo without its approval and recently asked YG Entertainment, Big Bang’s management firm, to stop using it.

According to a Wednesday posting on YG’s home page, Playboy brought into question the rabbit symbol on the cover of the GD&TOP’s album, which was released on Dec. 24 last year.

“The rabbit logo on the album was inspired by rabbit ears - as a celebration of the Year of the Rabbit in 2011 - combined with V of Victory,” said the posting, adding the logo was “based on the Playboy bunny.”

The management firm also admitted that it hadn’t sought permission from Playboy. “We are accepting the request from Playboy magazine and will immediately stop selling albums with the logo on them. We also plan to release a new album design by the end of July.”