The end is nigh! Doomsayers gather in France

The end is nigh! Doomsayers gather in France 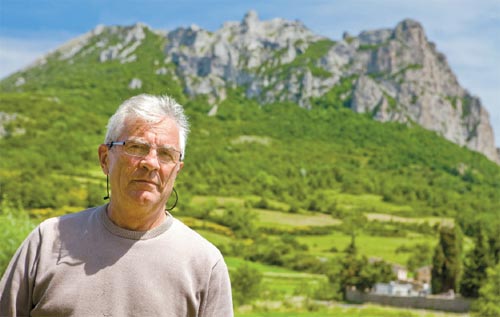 Jean-Pierre Delord, mayor of Bugarach, poses in front of the Pic de Bugarach in southwestern France. Surrounded in legend for centuries, Bugarach has become a focal point for many apocalypse believers as rumors have circulated that its mountain contains doors into other worlds, or that extraterrestrials will return here on judgment day to take refuge at their base. [REUTERS/YONHAP]


BUGARACH, France - Residents of the tiny southern French hamlet of Bugarach, population 194, are up in arms at a rising influx of doomsday believers convinced it is the only place that will survive judgment day in 2012.

Apocalypse devotees dressed in white are now a familiar sight in this picturesque village, drawn here by various New Age theories including claims that a nearby rocky outcrop, the Pic de Bugarach, harbors an alien technical base.

“These blasted prophets from all over the world have turned our mountain into some sort of UFO garage,” Jean-Pierre Delord, mayor of Bugarach, told Reuters. “You may think it’s funny, but they’re deadly serious .?.?. The end result is that all these fanatics are coming here to hide out.”

The Internet is awash with predictions that the world will come to an end next year, based in part on an interpretation of the ancient Mayan calendar that claims Dec. 21, 2012, marks the end of the current era. Surrounded in legend for centuries, Bugarach has become a focal point for many apocalypse believers as rumors have circulated that its mountain contains doors into other worlds, or that extraterrestrials will return here on judgment day to take refuge at their base.

“The aliens will get here soon, we need to prepare for their arrival,” said 42-year-old Kean, who traveled here from the Netherlands to witness the return of the otherworldly beings.

Nestled in the foothills of the Pyrenees, in a region once home to the mysterious heretic sect the Cathars before they were driven underground in the 13th century, Bugarach has inspired countless myths, supported by the particular nature of the site. Locals have dubbed the famous Pic, rising 1,230 meters (4,035 feet) above sea level, an “upside-down mountain” as the top layers of rock are said to be older than the lower layers. And the abundance of limestone rock and caves in the area has inspired stories of underground caverns and networks of tunnels, perhaps built during the war or even by the Cathars.

From there, it is a small step to the idea that the place could contain a magical underground hiding place or escape route from Armageddon.

Now, with natural disasters such as the earthquake in Japan and hurricanes in the United States adding to a sense of imminent doom, the number of people flocking to Bugarach has risen sharply - 20,000 visitors since the start of the year, more than double last year’s figures, according to the mayor.

Alerted by the phenomenon, France’s sect watchdog, the Miviludes, said it was placing the village under scrutiny, fearing it could become the site of mass suicides such as those in France, Switzerland and Canada in 1994 and 1997.