Founder-CEO reflects on his 20-year career

Founder-CEO reflects on his 20-year career 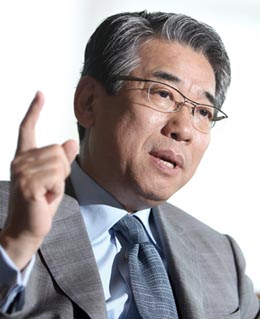 Stepping down from a chief executive position is never an easy decision to make, especially for the founder of a company. Before Yun Young-gak stepped down last month, he had been chairman of Samjong KPMG, the Korean branch of KPMG International, since 1991.

Samjong KPMG began with only six workers and has grown to become the second-largest accounting consultant group in Korea. Its 2,500 auditors, lawyers and consultants helped the firm generate an annual profit of 350 billion won ($325 million) last year.

Yun said his philosophy has always been, “to contribute to making Korea an advanced country.”

The JoongAng Ilbo caught up with Yun to look back on his career and find out what’s in store for his future.


Q. Why did you decide to step down as CEO a year before your term was to expire?

A. This year marks the 20th year since the establishment of the company. I think it is time for me to leave the company to find something new to do. This partnership firm can’t be inherited by my children. And I thought that younger employees within the company should be given an opportunity to shine, since a smooth succession is important for the existence of the firm, as well as customers’ profits.

So you are removed from management’s day-to-day decision making?

Not necessarily. I am going to participate in the decision making process as the head of the board of directors. [I will] externally represent the firm. And I am also going to fully support the new CEO (Kim Kyo-tae) to help him exercise his leadership successfully. I am going to play a leadership-coach role. I am sure the new CEO, who was appointed with 95 percent of the support of major shareholders, is going to do well, since he has enough experience.

You had declared Samjong KPMG to be a “clean firm” in that it would not submit to accounting fraud. Did you experience any internal resistance?

We faced difficulty as we were losing customers. Some people inside the firm even told me I was crazy. But transparent auditing is directly related to credibility in the value of Korean firms. I thought it would be crucial for Korea to enter the list of advanced countries. So I persuaded them to take a look at it from a long-run point of view.

Since you stepped down from your position you’ve become interested in “social consulting.” Can you explain the concept?

Social consulting is a concept where consulting services are given to social enterprises. I would like to create jobs for minorities so they can dream and show off their abilities. I am confident that I brought Korea one step closer to becoming an advanced country while I was operating Samjong KPMG. Now I would like to help bring the country’s social status up to the level of advanced countries.