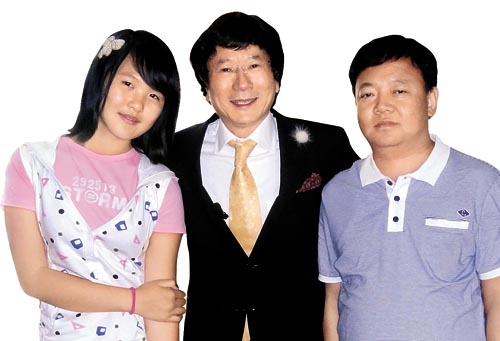 A North Korean defector, Kim Yong, center, met his friend Kim Dae-hyeon, right, and his daughter for the first time in 20 years. By Park Tae-kyun


At a cold noodle restaurant in Gyeonggi last week, two middle aged men embraced each other and wept.

“I really missed you,” replied Kim Yong, 51, his older brother. Yong is a North Korean defector who now lives in the South and works as a broadcaster.

The two men are not brothers by blood, but they call themselves brothers because they grew up under the same roof, often sharing the same blanket, in North Korea.

The younger Kim used to be a member of the Central People’s Committee of the North Korean Workers Party. He worked in the finance and accounting department and lived a life of luxury. But when his older brother defected to the South in October 1991, his life was turned upside down. He was ousted from his position and forced to work as a boilermaker.

“I even witnessed a colleague being shot for lying on his resume,” said the younger brother as he explained the reasons for defecting to South Korea.

Last November, the older Kim was notified by a close acquaintance of his long-lost friend, telling him about his plan to escape North Korea. At first, Kim was half in doubt, but when the person confirmed information such as his date of birth, Kim said he was excited.

A month later, Kim received a phone call from his younger brother in North Korea. “Brother, it’s me. I’m ready.”

As soon as Kim hung up the phone, he used his connections in China to help his brother cross the Amnok River from North Korea with his 14-year-old daughter. His wife died in an accident a few years ago.

Kim and his daughter safely crossed the Chinese border, but it would be months before he could feel at ease. The risks are immense. Many defectors are caught near the border or even in China and are sent back to the communist North.

The father and daughter safely crossed the border into Thailand late last year. There, the two men met for the first time in years.

Last January, the younger Kim and his daughter finally made it to South Korea.

“I will tell my little brother the 20 years of my experience in South Korea and teach him everything, from the manners of using public restrooms, to expressing gratitude to those who were of help,” said the older Kim.

Kim owns a lucrative noodle restaurant in Gyeonggi, turning over billions of won (millions of dollars) every year.