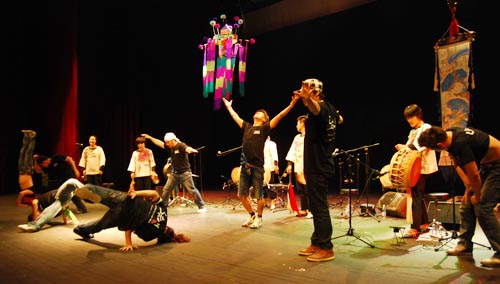 Gorilla Crew, a Korean b-boy group, performs at “Hello Lebanon, Meet Korea!” in Beirut, which celebrated the 30th anniversary of diplomatic ties between Korea and Lebanon at Palais Unesco, Tuesday. By Moon Gwang-lip


BEIRUT, Lebanon - In the middle of last month, Kamal Abbas, 40, posted a notice on Facebook with news he described as “something very nice”: Gorilla Crew, a Korean b-boy group, would soon be arriving in Beirut to perform for its Lebanese fans.

The fans went crazy online, and even crazier when the group stepped onstage Tuesday and Wednesday at two venues, the Palais Unesco and the Al Madina Theater. Busloads of fans arrived from Beirut and other Lebanese cities a couple of hours away.

“It’s like almost every b-boy in Lebanon is here,” said Abbas, a two-time Lebanon break dancing champion from the 1980s, who is now teaching the art form. “Seeing Korean b-boys in person - it’s a great opportunity for us.”

The b-boy gig was part of a two-day event held by Korea’s Ministry of Foreign Affairs and Trade and Lebanon’s Ministry of Culture to mark the 30th anniversary of diplomatic ties between the two countries.

The event was meant to bridge a cultural gap between two countries 8,000 kilometers (4,970 miles) apart from each other. Bordered by the Mediterranean Sea, Lebanon is culturally inclined toward the West and the hallyu, or wave, of Korean pop culture, hasn’t had the impact seen in countries closer to Korea.

Korean products, including Hyundai-Kia cars and Samsung and LG home appliances and electronics, have a sizeable presence in the Lebanese markets, but trade between the two countries was only $259 million as of 2008.

So many in the audience appeared charmed when the co-hosts juxtaposed Molayaa, a traditional Lebanese dancing troupe, and Noreum Machi, a Korean band specializing in traditional percussion music. But Gorilla Crew were the stars of both evenings. Lebanese youth stomped, cheered, clapped and whistled in response to “hair-spin,” “air-flair” and other virtuoso moves of the eight-member Gorilla Crew. “Good job, dude!” one audience member shouted.

Three Lebanese b-boy groups, including the country’s 2010 champion Makriss Dance Ministry, also performed on the first day. But after the show, they scrambled onto the stage to get some pointers from Gorilla Crew.

“It’s amazing,” said Omar Soubra, leader of 961 Crew, one of the Lebanese bands. “We want to go to Korea to learn [such moves],” he said.

Mohammad Saraj, another member of 961 Crew, said many Lebanese break-dancers consider legendary Korean b-boys like Hong 10, the winner of the 2006 Red Bull BC One competition, their role models.

Break dancing is not just hobby, said Abbas. For Lebanese youth disillusioned with high unemployment and long-standing sectarian divisions in the country, it’s emerging as an agent of change.

Abbas’s home of Tripoli in northern Lebanon - not the troubled Libyan capital of the same name - has an unemployment rate among youth of 70 percent, he said. Last week, six people were killed in the city in conflicts between different Muslim sects influenced by the ongoing turmoil in neighboring Syria. “In the North, too many youngsters have too much time and nothing to do, and we have someone to offer to give them ambition and support,” Abbas said.

Abbas, who won break dancing championships in Lebanon in 1986 and 1987, said the Cross Arts Cultural Association, which he founded with former b-boys, is teaching young Lebanese break dancing and helping them get jobs as professional performers.

“We have some vision, which is to take youngsters from drugs, from too many bad things, to put them onto the right path,” Abbas said.

Korea can help the transformation of Lebanese youth, he said, with its expertise in break dancing. Abbash wishes the Korean government would fund a b-boy school in Lebanon.

Last Friday, Gorilla Crew also performed in Cameroon on the occasion of the 50th anniversary of diplomatic ties between Korea and Cameroon.

Tania Mehanna, a Lebanese television anchor who emceed the first day’s event in Beirut, said sending cultural emissaries around the world is a good way of burnishing a country’s international reputation. “It will open the door for the country to do more for other countries,” she said.