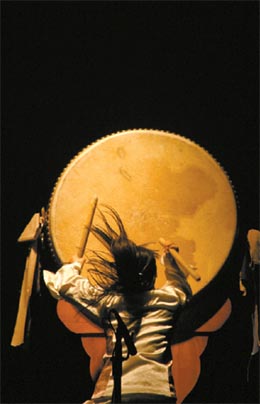 Gugak performance group Dulsori will perform at the Yeo Woo Rak Festival at the National Theater of Korea on July 19.

In the course of making small talk, a query that inevitably comes up is your favorite music genre.

When asked, reply gugak, or traditional Korean music, and observe as your conversation comes to a screeching halt, says Lim Youn-churl, president of the National Theater of Korea.

“People just think gugak is a difficult genre of music that requires some studying in advance,” said Lim at a press conference on June 21 at the National Theater of Korea.

To better acquaint the public with Korea’s homegrown music, the National Theater is opening this Saturday its second annual gugak festival, titled “Yeo Woo Rak Festival.” Yeo Woo Rak is the acronym of the Korean phrase, “Here is our Korean music.”

“It’s not just any gugak festival featuring different performances from different music groups,” Jang Jae-hyo, a festival music director, said at the press conference. “Through this festival, we wanted to envision where Korean music should head.”

Four traditional Korean music performance groups - GongMyoung, Baramgot, Dulsori and TORI Ensemble - will hold separate performances as well as a joint concert on the last day of festival. This year, their focus will be on the idea that gugak music originates from nature. 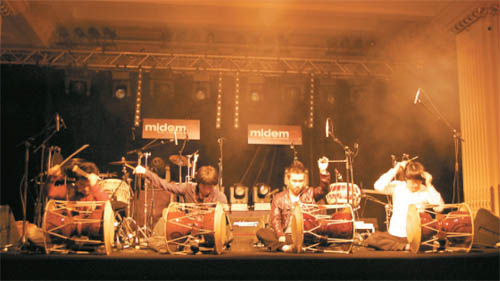 
GongMyoung, known for mixing and creating sounds from wind and percussion instruments, introduces instruments made of bamboo. Their performance, “Space Bamboo,” refers to the hollow space inside the bamboo stem.

They use more than 30 bamboo instruments, which they made when they formed the group in 2001. The group taps on the bamboo stems, which vary in length from 30 centimeters (11.8 inches) to 1 meter (3.3 feet), producing a three-octave range.

“We wanted to present the special gift of nature, especially from the bamboo forest. The serenity and comfort one can have in the middle of a bamboo forest will be conveyed to the audience,” said Seo Hyung-won, a member of GongMyoung.

Another group, Baramgot, intends to bring a mix of modernity and tradition.

“The instruments we play, such as the geomungo, were created centuries ago and carry the essence of ancient Korean sentiment,” said Won Il, the chief member of Baramgot.

“Along with the Koreanness hidden in the instruments, we add modernism by producing sounds played by 21st century people,” Won added.

Baramgot incorporates three traditional music genres in their performances. The group features the harmony of sanjo, sinawi and gut music. Sanjo is an instrumental solo, usually on a gayageum or geomungo, both of which are the most well-known string instruments in traditional Korean music. Sinawi is improvisational ensemble music, which was most popular in the southern region. And lastly, gut music is performed in shamanist ceremonies

The National Theater also presents a special guest performance at this year’s festival to highlight their theme of a nature-derived music.

Yang Bang Ean, a Japanese-Korean composer who is also known as Ryo Kunihiko, will open the festival with a solo concert. He is known for works inspired by Korea’s regions and nature.

“Prince of Jeju,” which he will play at the festival, is about his first impression of Jeju Island, the first place he visited in Korea. As the music progresses, listeners can almost picture the fields of bright yellow rape flower under a blue sky, the petals gently waving in a light breeze. Yang will also perform “Frontier,” which was the official music for the 2002 Busan Asian Games.

The four groups taking part in the festival are excited about their second opportunity to share traditional Korean music with a broad audience. It is their hope, they said, that many people can join them at the National Theater.

“The characteristics of each instrument are all created to imitate the sounds of the nature. That’s why people cannot fully appreciate [gugak] music by watching recorded videos. People need to come enjoy the performance in person at the theater to best experience this music genre,” said Won, of Baramgot.