What’s in a name? A lot of history, it turns out

What’s in a name? A lot of history, it turns out 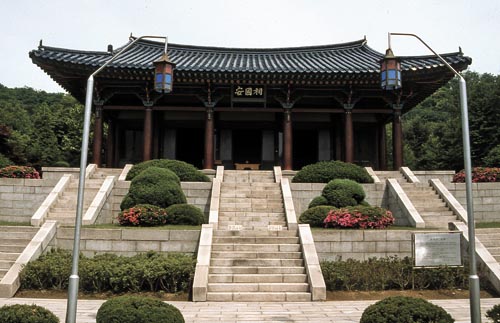 Nakseongdae Station, on line No. 2, is named after the legend of the birth of Gen. Gang Gam-chan of the Goryeo Dynasty, one of Korea’s most famous generals. Above, the house where Gang was born. [JoongAng Ilbo]


The daily routine of the subway ride in Seoul - one of the largest, most extensive metro systems in the world - often precludes contemplation over the station names’ etymology.

There are, of course, the obvious ones like Hongdae, which is Hongik University’s stop. But for many of the subway station names, a look into their origins reveals more than the physical landmarks adjacent to them but a veritable treasure trove of Korean history and mythology.

The first in a two-part series, we take you on a whirlwind etymological tour of some of the stations on subway lines No. 1 to 4. Next week, we’ll look at lines No. 5 to 8.

So impress your guests and friends. You never know - these stories could very well come in handy at your next cocktail party.

In the northern end of Seoul, Banghak comes from the Korean word for crane, hak, to mean a place where cranes are. But how the name originated is subject to debate.

One story says that area residents in the Joseon Dynasty climbed up nearby Mount Dobong to look for a site to build Dobong Lecture Hall. Below them, they saw a flock of cranes resting peacefully, and thus the name Banghak was born.

Another theory says that the name comes from the area’s topography, which is in the shape of a crane brooding on an egg.

Meaning “deer stream,” Nokcheon’s etymological origins is a story of rebirth after a natural disaster.Devastated by a flood long ago, legend says that a deer one day came down from the surrounding mountains and bathed in a stream called Jungrangcheon.

The next year, the town saw a successful harvest, followed by many years of bumper crops. Feeling blessed by their reversal of fortune, residents began to call the area Nokcheon.

Seongjong, the ninth king of the Joseon Dynasty, built an altar here to personally perform rituals to wish for a successful harvest.

Jegi, which roughly means “preparing the ground” or “building a site,” attests to the location’s historical function.

Another station named after the crane, Myonghak was once home to a large number of the auspicious birds, which symbolize longevity in Korean culture as well as in many other Asian cultures.

Although a crane is considered a good omen, the sound of many cranes together is loud, giving Myonghak its name, which means the town of crying cranes.

Once a large field with a high water table, Geumjeong got its name from the area’s tendency to spurt out water whenever someone dug the ground.

Water often overflowed wells and soaked the clothes of women who came to draw water. Geum, which means collar, and jeong, which means well, were combined to form a name meaning the collar-wetting well village.

Retreating from invading Japanese in the Imjin War in 1592, the royal forces became cornered in the area. There, villagers prepared a large feast for the soldiers, hoping to boost their energy and morale.

Reinvigorated, the royal forces defeated the Japanese army in an overwhelming victory. The town was renamed Gunpo, meaning a “starved army well fed.”

The founding of what is today Seoul is behind Wangsimni’s name. Taejo, the founder and first king of the Joseon Dynasty, entrusted Muhak, the great Buddhist monk and the king’s teacher, with the task of finding a site to establish a new capital.

Muhak headed to what was then southern Seoul to scout out a location.

There, he happened upon an old man who turned out to be the Buddhist monk Doseon, a famous geomancer.

Doseon advised Muhak to travel 10 ri (about 2.5 miles) farther. At the new location, Muhak designated the site as the new capital - where Gyeongbok Palace is today.

Wang means “come and go” or “back and forth,” and sip is the number 10 in Korean.

Meaning “holy water,” Seongsu’s name comes from a stream in the area. The water was so clean that people could drink it straight from the stream.

Adjacent to the stream was Seongdukjeong, a large pavilion where scholars would stroll, drink water and relax by singing songs or reciting poems. The stream’s purity led to the town becoming known as Seongsu, or the town with holy water.

Nakseongdae is the birthplace of one of Korea’s most famous generals, Gen. Gang Gam-chan. Best known for his victories in the Goryeo-Khitan War, General Gang was a scholar and military commander during the Goryeo Dynasty.

Among his accolades includes defeating the Khitans during the Gwuiju War by destroying a dam at the moment the Khitan army was attempting to cross a stream.

According to legend, a big star fell from the sky on the night the general was born.

The area was named Nakseongdae - nak meaning to fall and seong meaning star - to commemorate his birthplace as a “place where a star fell.”

Chungmu was a posthumous title granted to Korea’s most famous naval commander, Adm. Yi Sun-sin. Admiral Yi was born in Inheon-dong, formerly Guncheon-dong, and Chungmuro was named in his honor. In addition to the admiral, a number of historically important Joseon Dynasty figures lived here.

Pabal was a system of conveying messages using horseback riders or people on foot during the Joseon Dynasty. Local and central governments communicated with each other using the system.

There were several pabal stations in the area, giving rise to the name Gupabal, with gu meaning old or former. For messengers and their horses, a number of inns, taverns and stables were located in what is now Gupabal as well.

Do you recognize the word yak from store signs all over Korea? Yes, yak means medicine and yaksu means medicinal water. More precisely, yaksu refers to mineral water with some medicinal properties. The yaksu in this area was well-known for its effects on stomach problems.

In the time of King Sejo of the Joseon Dynasty, an influential political figure and defense minister, Han Myeong-hoe, had a summer pavilion in the area, where he loved spending time. It was a perfect getaway from government work and allowed him to rest his tired mind while being with friends and the beautiful nature along the Han River. The surroundings around the summer house depicted a picturesque landscape of floating sailboats and an island with mulberry trees in the distance. The name of the pavilion was Apgujeong, which would become the name for the area.

Yangjae Station was a major traffic and postal point during the Joseon Dynasty. This area was also known as Maljukgeori, which has the curious meaning of “porridge on a horse street.”

Yi Gwal, a general during the Joseon Dynasty, led 10,000 troops and mounted a coup against King Injo. Forced to retreat from Yi Gwal and his troops, King Injo happened to pass by this area. For the weary king, a Confucian scholar hurriedly made some red bean porridge, which the king ate while sitting on a horse in the street.

Once filled with wild animals that lived in the surrounding hills, area residents who had to cross over the hills carried stones to protect themselves. Once they climbed down the hill, they piled the stones on the seonangdang, a shrine to the village deity. The area was named Danggogae, a combination of seonangdang and gogae, which means hill.

This area was named after the soft, music-like sounds from a nearby stream. Gil means lucky or auspicious, and eum means sound, so the area got its moniker after the “music” of the stream.

Sin means new and Yongsan means Dragon Mountain. There are two stories about the origin of the name Yongsan. During the reign of King Giru, the third king of Baekje, one of the Three Kingdoms of Korea, legend says that two dragons were seen soaring over the Han River. A more likely reason, though, is that the sprawling mountain ranges in the region resembled a crooked dragon with its head raised.

In Chinese characters, ichon means two villages. There are two villages on an island in the middle of the Han River, whose inhabitants were constantly being evacuated because of flooding. The names of those two villages were Shinchon-ri and Sachon-ri - which were later merged into one in 1914 - giving the area its name of Two Towns.