Klitschko beats Haye to keep all belts in family

Klitschko beats Haye to keep all belts in family 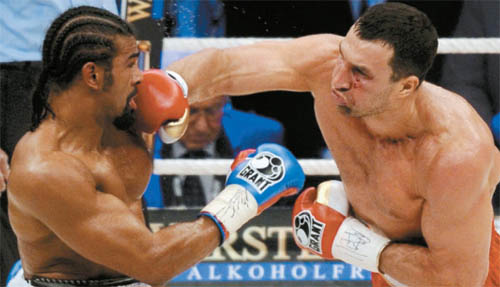 
HAMBURG, Germany - Vladimir Klitschko beat Britain’s David Haye on a unanimous points decision on Saturday to add the WBA heavyweight title to his three other belts and complete his family’s domination of the division.

While denied the 50th career knockout he had hoped for, Klitschko - now 56-3 - had more than enough reason to celebrate with his brother and WBC champion Vitali.

They now hold the WBA, WBC, WBO, IBF and IBO belts between them and have achieved their lifelong dream of uniting the division in the family.

“I would have loved to celebrate my 50th knockout,” said the youngest of the brothers, 35, who was taunted publicly by the trash-talking English showman Haye before the fight and had promised to punish him.

“I am still not okay with his behavior before the fight,” said Klitschko, nicknamed “Dr. Steelhammer.”

“It’s definitely disgraceful to the boxing fans, to the sport of boxing, the way the man behaved himself. I think the fight talked for itself. He connected a couple of punches, I wasn’t hurt in any situation in the fight.”

He added that Haye had been more cautious than any of the Ukrainian’s previous opponents that the Briton had criticized.

“We have accomplished our dream and unified all of the best belts in the heavy division. I would call us now undisputed heavyweight champions,” he said.

Klitschko aimed and landed far more blows than Haye, who was unable to connect with his famed “Hayemaker” while being picked off by his opponent’s jab.

The 30-year-old Briton, now 25-2 after his first defeat in seven years, explained afterwards that his loss had more to do with the secret injury he was carrying.

“I broke my toe about three weeks ago,” Haye told Sky television, baring his foot in the ring to prove his point. “I didn’t let anyone know that.”

Haye said he considered pulling out of the fight but refused to let down the considerable British support among the 50,000 strong crowd who made the trip to Germany for their biggest heavyweight fight in nearly a decade.

“There was no way after all the good fans had paid so much money to come over here, I could not pull out,” he said.