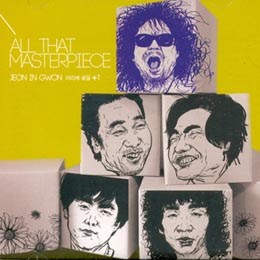 Although K-pop groups with flashy outfits and slinky dances are seeing immense popularity overseas, there was a Korean rock and ballad renaissance in the 1980s and 1990s among local bands. Ybmusic, a small Korean music producer, has digitally remastered and released five albums featuring five musicians who were at the pinnacle of their popularity in that era.

At the time, local music charts were dominated by musicians who started at the bottom and built up their reputations through performances at cafes and concert halls - unlike today’s pop stars, who are created by corporate management agencies.

The series includes music by: Jeon In-gwon, the lead singer of Deulgukhwa, a top rock band in the 1980s; the late Kim Gwang-seok, a folk singer-songwriter whose “Around 30” is still loved by people in their 30s; Jo Ha-mun, a ballad-singer turned clergyman; Lee Mun-se, a still-popular ballad singer; and Choi Seong-won, famous for “Blue Night of Jeju Island.”

Various “All That Masterpiece Series”