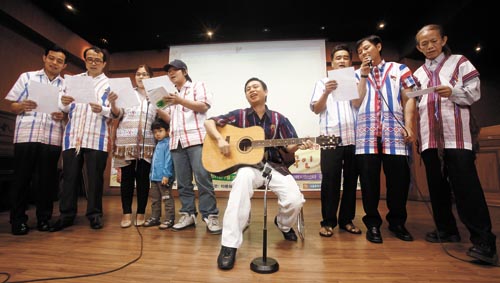 The Burmese KYO Culture Group performs a Karen song to raise awareness of their culture during the Multicultural Foreigner Poetry Reading on Sunday, hosted by Korea’s Migrant Center in Guro District, western Seoul. By Choi Dae-woong


Wang Xiao-xin seemed fearless behind the microphone. Dressed in a bright-red traditional Chinese dress, the Chinese-Korean fourth-grader masterfully recited “Father’s Heart,” by the poet Kim Hyeon-seung. The audience was captivated.

The daughter of one of Korea’s many multiethnic families, Wang was one of over two dozen participants in the third-annual Multicultural Foreigner Poetry Reading, hosted by Korea’s Migrant Center, in Guro District, western Seoul.

“At the first poetry reading in 2009, there were few participants,” said Moon Chang-kil, who started the festival and is director of the Multicultural Creative Network. “But the number of poets has significantly increased.”

Moon said the center began the poetry reading to provide a venue for people to express their cultures through literature. And for Moon, his work is personal: it was at the center where he met his wife, a Burmese immigrant.

While most of the event was filled with poetry readings - some self-composed - there were also dance and musical numbers.

Representing countries like Burma, China, Japan, Mongolia, Indonesia and Vietnam, the participants dressed in their native attire. Together, they were a veritable cross-section of Korea’s various cultures.

Korea’s Migrant Center provides support to foreign migrant workers living in Korea by offering Korean language and IT courses, information on the education and legal system and events similar to the poetry reading to help ease the process of adapting to Korean life.

Wang Jung-sun, a participant in the poetry reading, recited and performed a Chinese poem and song.

“I came to Korea in July of 1999 for business reasons but ultimately decided to stay after I met my Korean husband,” Wang said.

Wang briefly described her beginnings in Korea. “At first, life was so miserable. I used to regularly go to Namsan and cry at the bottom. I could not speak a word of Korean but now I am so happy. After encountering this support center my life has really changed.”

Through the center, Wang said she and her children were gifted with friends and a support network.

Hideko Yamaguchi, a middle-aged Japanese immigrant and mother of three children who has been living in Korea for the past 22 years, discovered the center’s poetry event online.

She recounted her difficult adjustment to Korea. “Compared to Japanese culture, Korean culture is more free and honest,” she said. “But I experienced some hardships when communicating with my mother-in-law.”

Although Yamaguchi faced some cultural conflicts, she said she was ultimately able to adjust to life in Korea through the help of these multicultural support centers.

The poetry reading ended with a performance by the Burmese KYO Culture Group and an awards presentation for selected poets. Moon was optimistic about the poetry reading in the years ahead. “I hope to see even more people next time who can express themselves through poetry,” he said. “We definitely want to continue holding this event in the future.”