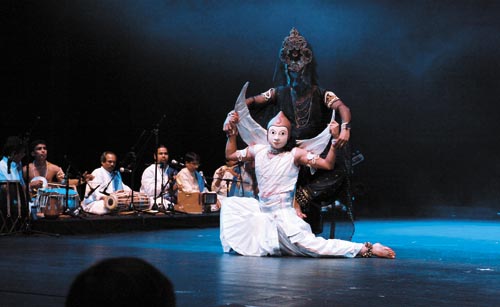 Renowned Indian dancer Ranjana Gauhar and her team present classic and contemporary Indian dances and musical performances at the opening ceremony of the 2011 Festival of India in Korea, at the Sejong Center for the Performing Arts in central Seoul on June 30. Provided by the Indian Embassy in Seoul


The sixth-month-long 2011 Festival of India in Korea held its opening ceremony on Thursday at the Sejong Center for the Performing Arts, with renowned Indian dancer Ranjana Gauhar kicking off the series of cultural and artistic events with a rousing dance and music performance.

The festival’s co-hosts, the Indian Embassy in Seoul and the Indian Cultural Center, want to increase cultural interaction between Korea and the South Asian country of more than a billion people.

Karan Singh, president of the Indian Council for Cultural Relations, said that when President Lee Myung-bak visited India in January to promote Korean culture there, Lee said he hoped to see Indian culture promoted in Korea in 2011.

“We appreciate that this festival is the fulfillment of that deal,” Singh said.

Minister of Culture, Sports and Tourism Choung Byoung-gug said at the opening ceremony he was pleased with the progress Korea and India have made over the years.

“Since Korea and India established diplomatic ties in 1973, both countries have steadily expanded bilateral interaction in various areas, including culture,” Choung said. “We expect our [cultural] relationship to develop further this year. The Indian Council for Cultural Relations will open a new office in Seoul tomorrow to begin introducing the unique culture of India to Korean citizens. And in November, a Korean council for culture relations will be launched in New Delhi.”

As part of the 2011 Festival of India in Korea, several cities will host a wide range of events relating to Indian culture, including a film festival, a Buddhist art exhibition, a violin orchestra with traditional Indian musical instruments and an exhibition of 50 original paintings by Indian poet Rabindranath Tagore. The festival ends in December, but a closing ceremony will be held at the National Theater of Korea in February.