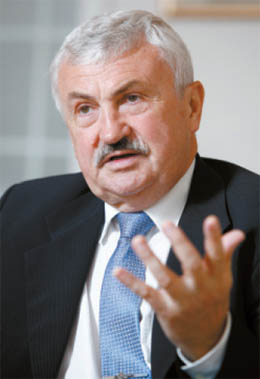 New Polish Ambassador to Korea Krzysztof Ignacy Majka had been a renowned scientist in his home country and didn’t know much about Asia until he went to India in 1979 as a research student.

Since then, the ambassador said he has been unable to stop learning about Asia.

After finishing his research in India in 1982, he served as Polish consul there from 1993 to 1997 and later as ambassador from 2001 to 2008, concurrently representing his country in the Maldives, Nepal and Sri Lanka. From 1997 to 2001, Majka served in the Polish Senate.

Just a month after taking up his post as the new ambassador, Majka has been busy crisscrossing the peninsula visiting universities and high schools.

“Poland has a deep interest in developing relations in culture, as well as science and technology,” the ambassador said in an interview at his residence on June 21.

With the start of the Korea-European Union free trade agreement, the ambassador said he hoped to boost bilateral relations between his country and Korea, not only in political and economic areas but also in education.

Majka recently traveled to Keimyung University in Daegu to celebrate Stanislaw Moryto, president of the Frederic Chopin University of Music, who was receiving an honorary doctorate from the school.

And when it comes to economic cooperation, the ambassador was optimistic that the FTA would result not only in increased trade but also a strengthening of the two countries’ ties.

“Poland is very attractive for Korean businesses as a destination of foreign investment,” the ambassador said. “There are already well-established big conglomerates from Korea in Poland, especially in the electronics industry, such as LG Electronics, Samsung Electronics, Daewoo Electronics and SK Chemicals.”

Roughly 120 Korean companies are located in Poland, and trade volume between the two countries has steadily increased over the past five years, for an overall 29.2 percent rise.

A recent report from the Korea International Trade Association said that the FTA’s implementation would result in Korea and Poland abolishing the 5 percent tariff on electronic components, which account for a large portion of trade between the two countries.

“Entering into force the free trade

agreement will result in significant facilitation in trade conditions between Poland and Korea,” the ambassador predicted. “Thanks to cuts in tariffs as an element of the EU-Korea FTA, Korean exporters to Poland will save at least $65 million and Polish exporters to Korea around $15 million. We believe it will offer tremendous opportunities to increase trade volume between two countries.”

Since his official appointment as ambassador on May 3, Majka has already found plenty of similarities between his home country and Korea.

“When I visited the Department of Polish Studies at Hankuk University of Foreign Studies on June 9, I realized how many similarities Polish and Koreans have in expressing their emotions, being friendly and open-minded in behavior,” he said.

“In Polish culture, when a guest comes to your home, you have to offer him the best treatment and treat him with great respect so he enjoys your company. And I found that this is also a common thing between the two countries.”

For Poland’s upcoming presidency of the Council of the European Union, which started on July 1, the ambassador said it will be an excellent opportunity to work toward boosting economic, political and diplomatic relations between the European Union and Korea.

“As the presidency in the Council of the European Union from July, Poland will also have some additional duties,” the ambassador said. “And this will give us a chance to promote ties and bring closer the European Union citizens to Koreans. Definitely, this will be a busy period for us - the Polish Embassy in Seoul.”