Sharing cultures one story at a time

Sharing cultures one story at a time 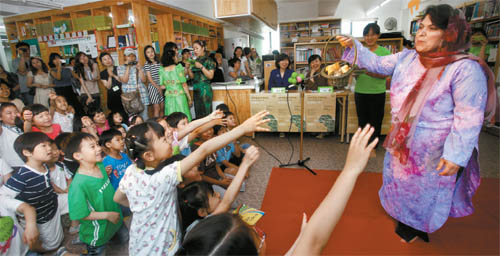 Zinnatun Nahar, one of the contestants in the World Fairy Story Telling Contest on June 28, presents a Bangladeshi traditional fairy tale at Library Modoo in Dongdaemun District, Seoul. By Choi Dae-woong

Ten immigrants, from countries such as Bangladesh, China, Iran, the Philippines and Vietnam, participated in the contest, with some teaming up with family members or friends to tell their stories to the gathered listeners, who were mostly children.

Groups of Korean children also took part in the competition. Some of the participants even prepared their own costumes and props.

Teng Yan, 39, took home first place with his telling of “What Would the Moon Taste Like,” a traditional tale from his native China. Yan entered the contest with his Korean wife and two daughters, who, despite not knowing their father’s native tongue, took it upon themselves to memorize the Chinese lines.

“I’m really honored and happy because it was such a memorable opportunity for my two daughters,” Yan said.

Yan’s family presented the story of how various animals - a turtle, elephant, giraffe, zebra, lion, fox, monkey and mouse - climbed on top of one another because they wanted to taste the moon.

Two teams were awarded second place - Korean-native Jung Jae-wu, 9, who told a traditional Korean story called “A Grandma Gives Red Bean Porridge to a Tiger” with six friends, and Daikejun, a Chinese native who, with her son, told the tale of “Country Mouse and City Mouse”.

Everyone who entered the contest received a participation award.

At the end of the contest, the winner of last year’s contest gave an encore performance of the traditional Japanese story “Eomjidongja.”

Eomjidongja is the tale of a thumb-sized man who travels to the city and fights a troll. When he happens upon a magic wand, he wishes to become normal-sized and marries a pretty woman.

Located in Dongdaemun District in Seoul, Library Modoo, where the contest was held, was the first library in the country established for multiethnic Korean families.

“Korea is becoming a multicultural society, but it hasn’t become fully acknowledged yet,” said Moon Jong-seok, the library’s founder. He said he came up with the idea to establish the library to spread multiculturalism to children.

STX Corporation has helped fund the library’s operations since its founding in September 2008. “As years go by, the contest has grown and I’m delighted,” Kang In-kwon, a director of STX Corporation who is a donor to the library, said. “This contest is a good way for children to learn their mothers’ or fathers’ language.”

Moon, the founder, now dreams of having the contest for people from all parts of the country.

“This event was not for participants to show off to the audience that they speak different languages but was for respecting the languages spoken by mothers and fathers,” Moon said.

“I want different cultures to be expressed more and mixed with Korean culture and widely spread around.”