Food is the star in new series on Korea

Food is the star in new series on Korea 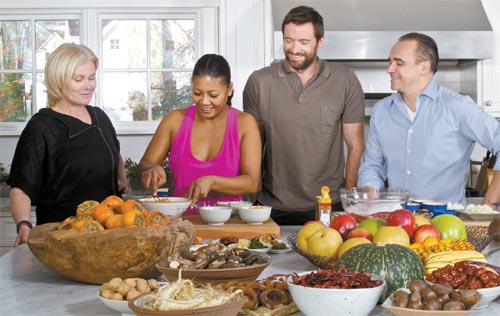 Marja Vongerichten, second from left, Hugh Jackman and Jean-Geroges Vongerichten make a Korean dish in this still from “The Kimchi Chronicles,” which is slated to premiere on U.S. network PBS this week. Provided by Eric Rhee


When producer Eric Rhee was introduced to Marja Vongerichten one night at a restaurant in New York, he knew he had struck gold.

Rhee was planning a new television series about Korea over dinner at Jean Georges, a four-star restaurant in New York, and happened to tell the owner, renowned chef Jean-Georges Vongerichten, about his plans. Vongerichten’s wife, it turned out, is a Korean adoptee and her story provided the connecting thread they were looking for.

“I was introduced to Marja one night at Jean-Georges’ flagship restaurant,” Rhee said. “After hearing her story, we knew she would be the perfect host and voice for our series.”

Rhee is the head producer of the much-talked about new documentary TV series, “The Kimchi Chronicles,” which will start airing on PBS in the United States this week.

The 13-part series, starring Marja and Jean-Georges, with guest appearances by Hugh Jackman and Heather Graham, will focus on Korean cuisine, and in each episode the couple will visit farms, restaurants, markets and even home kitchens in Korea.

The main subject might be Korean food but it is Marja’s journey to find her roots and rediscover Korea that weaves the episodes together, giving the series a human element.

Marja, who was born to a Korean mother and a U.S. soldier, was adopted to Virginia in 1979 when she was 3-years-old.

When she was 19, Marja reunited with her birth mother, who had since married an American and was living in Brooklyn.

“I always had memories of my mother and time in Korea,” Marja recalled in an interview with The New York Times.

Rhee, along with his mentor, “Kimchi Chronicles” director Charles Pinsky, worked for two years to put the series together.

The Korea JoongAng Daily conducted an e-mail interview with Rhee to talk about the series and the missing element in today’s television shows.


Q. How did you first get involved in this project? 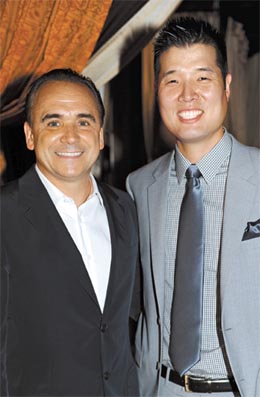 Jean-Georges Vongerichten, left, poses with Eric Rhee in this promotional photo for “The Kimchi Chronicles.”

A. My TV production career started over four years ago when I helped produce the series, “Spain... on the Road Again” (a 2008 PBS documentary series featuring actress Gwyneth Paltrow). It was the first TV series I ever produced under the guidance of my mentor, Charles Pinsky, who also directed “The Kimchi Chronicles.”

The goal of the project is to build a cultural bridge for everyone in the world to better understand and appreciate Korean food and culture.

How did you manage to bring together celebrities such as Hugh Jackman and Jean-Georges Vongerichten? What were your biggest obstacles during the preparation and making of “The Kimchi Chronicles”?

One of the biggest obstacles was narrowing down the many choices we had in terms of where and what kinds of stories to include in our filming.

We are very fortunate that Hugh Jackman is a big fan of Korea but more importantly that he is good friends and a neighbor of Marja and Jean-Georges. We were also lucky to have Heather Graham come to Korea and explore the country, given her passion for Korean food.

Why did you choose Marja and Jean-Georges Vongerichten as the two central figures in the show?

Marja and Jean-Georges seem to be the perfect pair to introduce Korean food and culture. I believe audiences can better understand and appreciate a show when there’s a personal and human element to the story. Marja’s story is very remarkable and what better counterpart than one of the world’s greatest and most charming chefs!

Do you think that because Marja’s story is such a powerful one, it might cast a shadow over the real subject of the show?

Marja’s story is powerful, but rather than cast a shadow, I think it complements the show and provides a personal connection to Korean food and culture and makes the entire series more interesting.

A lot of TV shows these days are missing that human element and are artificially created. I think “The Kimchi Chronicles” is organic because it follows the true story of Marja’s passion to explore Korean food and culture and it is told through the eyes of someone who has rediscovered her Korean heritage.

Why did you choose Korean cuisine as the topic of your show?

Even though I was born in California, I’ve grown up with the best Korean food anyone could ask for in my mom’s cooking. What better way to recognize my mother than through a series that shares the beauty of Korean food and culture?

Do you think Korean cuisine has the potential to become as popular in the U.S. as, say, Japanese food?

I think Korean food can be as popular as any ethnic cuisine in America and it is gaining a lot of momentum. Korean cuisine has a lot of great strengths. I think it’s one of the healthiest cuisines in the world and also one of the most diverse.

Most people who don’t know Korean food don’t realize how diverse it is in terms of ingredients and types of dishes. One of my favorite reasons for loving Korean food is that whether I want meat, seafood, vegetables, soup, rice or noodles, there’s a Korean dish that is delicious and satisfying. I never get tired of eating it.

The challenge lies in educating and creating awareness for people. One way to help conquer the challenge is to continue to develop new and interesting ways for people to learn about and taste Korean food.

This is one of the first shows of this scale in the United States to feature Korean cuisine and culture as its main subject. Was it a big risk for you to make a show about such a relatively unknown culture?

It’s always a risk to create a TV series, especially on topics that you don’t know if the mainstream audience will appreciate. However, we’ve put together an amazing team of award-winning talent starting with our director, Charles Pinsky, to our director of photography, Sam Shinn.

Our goal was tell a human story paired with beautiful shots of Korean food and the countryside and turn it into a series that would leave people hungry for and excited about Korean food.

There are many shows these days about food from around the world. What distinguishes “The Kimchi Chronicles” from all the others?

“The Kimchi Chronicles” is unique because Marja’s personal story is tied to the discovery of Korea food and culture. We believe this is quite a unique story and theme for a TV series. A lot of other shows are hosted by writers, chefs or journalists who don’t necessarily have a connection to the theme.

Our series is probably one of the few nationally televised series’ that is hosted by someone whose heritage comes from the country we visit.

In retrospect, are there any scenes or episodes you wish you could shoot again?

Nothing in production goes 100 percent as planned, but that’s why we shoot about 200-300 hours of footage for 13 half-hour episodes. I feel lucky and glad to say that we have never felt the need to reshoot anything. However, I’m sure that if we had the budget, it would have been fun to spend more time shooting sketch (or) b-roll footage all over Korea.

What do you hope the audience will gain from watching “The Kimchi Chronicles?”

I would love for the series to inspire people to share Korean food and culture with their peers. For those who are already familiar with Korean food or culture, I hope that they feel a connection to something they see in the series that they can be proud of.

And for those who don’t know Korean food or culture, I hope they become more curious about Korean culture, try Korean food, and tell their friends and families about it.

My dream is that this series can help make Korean food and culture less foreign to people and something everyone can relate to and appreciate.