Djokovic’s run started with a haircut

Djokovic’s run started with a haircut 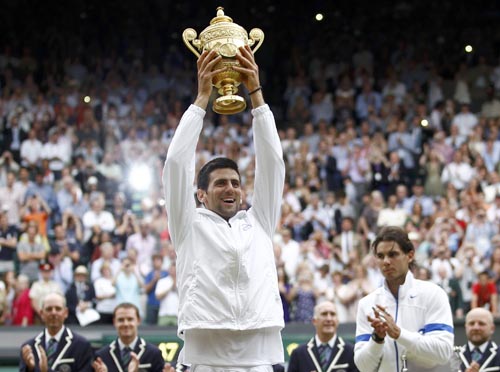 Novak Djokovic of Serbia holds the winner’s trophy after defeating Rafael Nadal of Spain, right, in the men’s singles final at Wimbledon in London, Sunday. [REUTERS/YONHAP]


LONDON - The Wimbledon champion’s journey to joyfully eating the Centre Court grass started with the ugliest of haircuts.

Seven months ago, Novak Djokovic had his head shaved to celebrate Serbia’s first Davis Cup victory. His mother certainly didn’t like it.

For the rest of us, it seemed more proof that he should really be called “Joke”-ovic, a player who despite his wells of tennis talent wasn’t worth taking too seriously and who had perhaps been driven a little nutty by years of banging his head against two immovable objects: Roger Federer and Rafael Nadal.

Well, sorry, Novak, we take it all back. That haircut seems like absolute genius now.

Leading a Serbian comeback over France in December proved to be the catalyst for the most impressive run to open a season by a man in a quarter-century.

Taking his once war-scarred country to the top changed Djokovic. Although it was a team effort, he learned about himself, about how good it felt to be No. 1.

He says so. His mother says so. So does his uncle. And the tennis record books prove it. 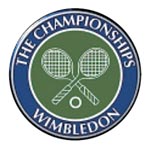 48-1. That’s 48 victories - including, with Wimbledon, two Grand Slam singles titles - and just one defeat in six months. Not since John McEnroe went 52-1 in 1984 has the sport seen anything like it.

“After the Davis Cup win, I was full of life, full of energy, eager to come back to the tennis court, eager to play some more, win some other tournaments,” Djokovic said Sunday after dethroning Nadal 6-4, 6-1, 1-6, 6-3 in the Wimbledon final. “In a sentence: I lost my fear. I believed in my abilities more than ever.”

In the first two sets against Nadal, he barely put a foot wrong. The player who used to be waylaid by mystery ailments during matches, at times brilliant, at times flaky, was as serious as one can be during the final, all focus, fine forehands and poise. For purists, he even threw in a dose of serve-and-volley, earning himself championship points by coming to the net and sending his volleyed winner cross-court.

“Winning, in just over an hour, two sets against the defending champion on the court that he hasn’t lost [on] for three years was incredible,” he said. “You know, I was just trying to enjoy the tennis that I play. Obviously, it was the best tennis match on grass courts that I’ve played ever, for sure.”

He literally tasted his victory, crouching down and pulling up some blades from the hallowed turf and popping them in his mouth.

“I felt like an animal,” said Djokovic. “I wanted to see how it tastes. It tastes good.”

What makes Djokovic’s climb, and it has been a long and arduous one, to No. 1 more impressive is persistence. He could, and at times did, have become dispirited as Federer and Nadal left only crumbs for everyone in tennis. Until Djokovic won at the Australian Open this January, only five of 30 Grand Slam titles since Federer won his first at Wimbledon in 2003 went to someone not called Roger or Rafa.

His uncle, Goran, recalled how Djokovic was stumped by a close-fought loss to Nadal in Madrid in 2009 when despite playing “unbelievable tennis” he was still left wondering: “What is this? What can I do? What should I do to beat this guy?”

“I would lie to you if I [said I] didn’t have doubts,” Djokovic acknowledged. “I did have difficult, crisis times where I didn’t know if I could really make it, you know? Because the first two guys were so dominant.”

Well, that may be stretching it.

Federer and Nadal are not done yet. Getting to No. 1 is one thing. Keeping that ranking when two of the greatest players tennis has seen are breathing down your neck could be something else.

Or, as Bjorn Borg put it, Djokovic is “flying on the moon,” but “Nadal is going to come back; he’s going to win more Grand Slams.”

But, for the moment, Djokovic has the world at his feet.