Pope hopes to woo the arts

Pope hopes to woo the arts 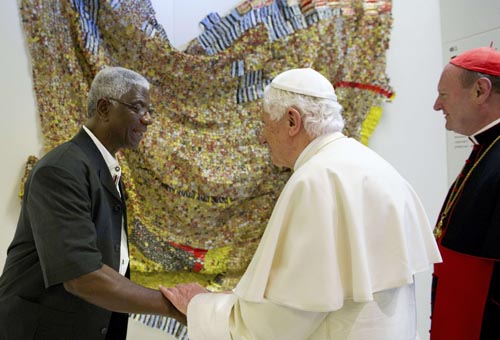 Pope Benedict XVI shakes hands with an unidentified artist during an art exhibition to celebrate the 60th year of his priesthood at the Vatican on Monday. [REUTERS]


VATICAN CITY - Pope Benedict XVI on Monday reviewed work by 60 artists during the debut of a program he spearheaded hoping to strengthen links between the cultural world and the Roman Catholic Church.

The exhibition, titled “Splendour of the truth, beauty of the Truth,” featured mainly European artists, sculptures, architects and musicians who agreed to display their work at the Vatican’s Paul VI Audience Hall.

“I would like to renew to all artists a friendly and passionate appeal,” the pope, a music lover, said.

“Never separate artistic creativity of the truth from charity ... but with the richness of your genius, your creative enthusiasm, always be, with courage, seekers of the truth and witnesses of charity,” he added.

“Charity makes life a masterpiece and every man an artist,” the pope told the assembled artists, some of whom displayed work created specifically for the event, while others exhibited work done previously.

The 104-year-old Brazilian architect Oscar Niemeyer displayed his designs for the steeple of the main church in Brazilian town Belo Horizonte.

The Vatican has for a number of years been trying to woo the arts closer to Catholicism. The current pope invited 260 artists to the Sistine Chapel in 2009. His predecessor John Paul II in 1999 said the Roman Catholic Church “needed art.” In 1964, Paul VI apologized for the Church’s intolerance toward art.

Christianity inspired much of the art produced in the Middle Ages up to the 17th-century Baroque era, including the Renaissance period.

But wars and tragedies in the 20th century widened the gap between religious faith and artistic expression, which rebelled against the romanticism of the past.