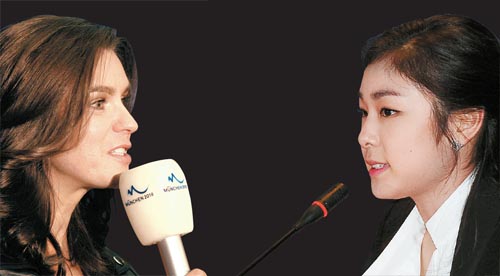 After the International Olympic Committee decides the 2018 Winter Games host in Durban, South Africa, tonight, only one of these two ice queens will be happy: Katarina Witt, head of the Munich bid committee and a two-time Olympic figure skating champion, left, or Kim Yu-na, the 2010 Olympic figure skating gold medalist and an honorary ambassador for the Pyeongchang bid committee. [AP/YONHAP]


The city of Durban in South Africa has a lucky ring for many Koreans, and especially sports fans.

In 1974, boxer Hong Soo-hwan captured the World Boxing Association bantamweight title in the port city. And in the 2010 World Cup, Korea’s national football team made the round of 16 there after a 2-2 draw with Nigeria, the first time the nation did so on foreign soil.

Today, Koreans will hold their breath in anticipation of another victory in Durban, when the 123rd International Olympic Committee (IOC) General Assembly is held to choose the host of the 2018 Winter Olympics.

Will the committee choose Pyeongchang, a small city in Gangwon? Or one of the European cities competing against it: France’s Annecy or Munich in Germany, which is mounting a strong bid.

After two years of preparation and promotion, Pyeongchang’s fate will be determined in Durban at midnight Korea Standard Time, when some 90 IOC members cast their votes at Durban’s International Convention Center.

Pyeongchang, about 180 kilometers (112 miles) east of Seoul, threw its hat in the ring for the third time in 2009 and was made an official candidate last year.

The Korean alpine town was narrowly defeated by Vancouver, Canada, for the 2010 Winter Olympics, and again for the 2014 Games by Sochi, Russia. Hoping to become the first Asian city outside Japan to host the Winter Games, Pyeongchang has gone all out to get these games. President Lee Myung-bak flew halfway around the world to Durban Saturday to make a final appeal in front of IOC members.

“I wouldn’t make this about personal glory,” Lee said to five foreign media outlets, including The Associated Press, Reuters and AFP, on Monday. “It is our vision, our aspiration of becoming a mecca for winter sports.”

The 69-year-old president added that it is his duty and mission to try to bring the Winter Games to Asia. (Japan hosted the games twice, in Sapporo in 1972 and Nagano in 1998.)

Lee, who is on a 10-day trip to three Africa nations - starting with South Africa and going on to the Democratic Republic of the Congo and Ethiopia - said his government is ready to carry out all its promises and will do its best until the decision is announced.

“We have done a lot of preparation for Pyeongchang,” Lee said. “I hope the IOC members will appreciate the efforts we have made.” 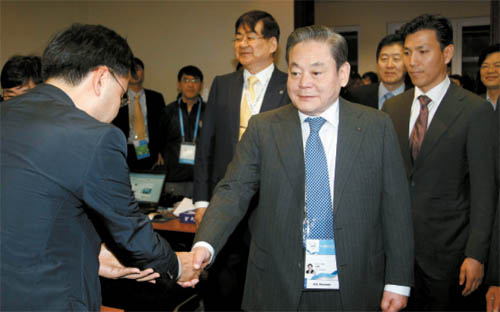 Lee is probably the most powerful person in Korea, but today in Durban, he will be just one of eight representatives for Pyeongchang’s hopes and dreams.

Two honorary ambassadors, 2010 Olympic figure skating champion Kim Yu-na, and Toby Dawson, a Korean adoptee and U.S. Olympic skier, will also speak in front of IOC members tonight. Dawson’s participation was disclosed by the bid committee on Sunday as a “surprise card” for the final presentation.

The eight presenters will be the public faces of Pyeongchang’s ambitions, while other bid committee members like Minister of Culture, Sports and Tourism Choung Byoung-gug, IOC member Lee Kun-hee and Gangwon Governor Choi Moon-soon will support them behind the scenes.

In its two previous bids for the Games, Pyeongchang put more emphasis on the fact that Korea is a divided nation and that hosting the Olympics could help ease tensions between North and South Korea. That concept, however, was too similar to Seoul’s argument for why South Korea should have been allowed to host the Summer Olympics in 1988, and was finally considered inadequate.

For the 2018 Winter Games, Pyeongchang has been working a different strategy under its campaign slogan “New Horizons.”

The Korean town has been promoting what it has done to become an Asian winter sports hub, highlighted by its “Dream Program,” a project started in 2004 that invites young athletes from countries without a developed winter sports scene to visit Korea and experience winter sports.

The city has also emphasized its readiness to host the Games.

Pyeongchang now brags of having two main venue clusters that are compact and close enough to each other so athletes can move from venue to venue in no more than 30 minutes. Strong public support - 92 percent from local residents and 87 percent from Koreans as a whole - is another advantage for Pyeongchang.

“I strongly believe that the Winter Games in Pyeongchang will be a most ideal and compact event like no one has yet experienced,” bid chief Cho said on Monday after the rehearsal.

But still, Pyeongchang has to triumph over two strong rival candidacies, with Munich’s considered the most challenging.

The German city hopes to become the first city to host both the Summer and Winter Olympics and has been emphasizing “going back to the roots of winter sports,” according to Munich bid chief Katarina Witt.

The Bavarian capital has promised to revitalize the Winter Olympic brand. And while German President Christian Wulff was flying into Durban on Monday, the Munich bid committee disclosed that football legend Franz Beckenbauer was their secret weapon for their final push.

“I think we have great momentum,” Witt told Reuters on Monday. “We gradually tried to get better and better with presentations to get our message out about what we can offer to the Olympic movement, and especially the athletes who will compete in 2018.”

Annecy, a lakeside town in south-eastern France, uses the slogan “Snow, Ice and You,” and received a good evaluation on their technical briefing in May. But the absence of French President Nicolas Sarkozy in Durban hinted that they may not think they will win.

Charles Beigbeder, the Annecy bid chief, admitted that they had some problems in the past, including lack of support from the French media, but said he will not give up until the end. “We are determined and united,” Beigbeder told Reuters Monday. “Whatever happens on Wednesday, we are proud of what we have achieved.”

For their final appeals, the IOC has given each city 70 minutes, including 45 minutes for a presentation and 15 minutes for a question and answer session.

Munich present first, followed by Annecy and Pyeongchang, which will pitch its case at 12:05 p.m. (local time). After finishing all the presentations, the IOC’s on-site inspection team will report the results of their evaluations to IOC members for 30 minutes. Secret electronic voting begins at 3:35 p.m. 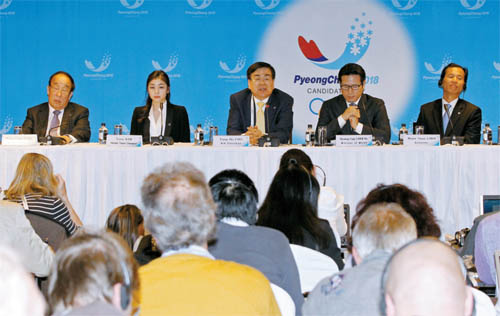 Pyeongchang bid committee members speak during a press conference at the Coastlands on the Ridge hotel in Durban, South Africa, on Monday. [YONHAP]

Canadian IOC member Richard Pound told The Associated Press on Monday: “You can’t win in the presentations, but you can lose [on votes].’’ That is true because the host city for the Winter Olympics is, after all, determined by a vote among IOC members, not the evaluations or presentations.

Under the IOC’s rules, a majority vote is required for victory. The cities that get the fewest votes are eliminated after each round until a majority winner emerges.

Currently, the IOC has 110 members, but President Jacque Rogge doesn’t vote and IOC members from candidate cities are not allowed to vote while in contention. Each city has two IOC members - Lee Kun-hee and Moon Dae-sung for Pyeongchang, Thomas Bach and Claudia Bokel for Munich and Jean Claude-Killy and Guy Drut for France.

That technically leaves 103 IOC members eligible to vote, but usually several members are ill or unable to attend the session, so the actual number is expected to be around 97 to 99, according to the Pyeongchang bid committee.

Brazilian Joao Havelanche, the oldest IOC member at 95-year-old, has reportedly not traveled to Durban due to personal reasons, while U.S. IOC member James Easton is recovering from a stroke in the hospital. Mounir Sabet, Egypt’s IOC member, is also doubtful after his movements were restricted following political unrest in Egypt this year.

The ideal scenario for any city is to seal the victory in the first round of voting. If the vote goes to a second round, the remaining two cities get just 15 minutes to lobby IOC members. It’s critical to capture the votes that went to the city eliminated in the opening round if the ballot jumps to the next round.

This was a lesson Pyeongchang learned in its previous failed bids.

In 2003, Pyeongchang was the frontrunner for the 2010 Winter Games when it got 51 votes in the first round, followed by Vancouver with 40 and Salzburg, Austria, with 16. But Pyeongchang ultimately lost to Vancouver 56-53 in the second round.

A near-identical situation occurred for Pyeongchang when it bid for the 2014 Games. In 2007, Pyeongchang led with 36 votes, followed by Sochi, Russia, with 34 and Salzburg with 25. But in the end, Pyeongchang was defeated again as Sochi won 51-47 in the final round.

“I would have thought if Korea is going to win they’ve got to win on the first round,” Pound said.

Clash between two figure skating greats, not on ice

“To absorb floating votes, we need to have an emotional presentation to capture the hearts of IOC members,” Korean Olympic Committee chairman Park Yong-sung said on Monday.

Kim, the 20-year-old reigning Olympic champion, is a living embodiment of Pyeongchang’s message of a “New Horizon” for winter sports after she became a world star coming from a country that lacks a foundation for winter sports.

Meanwhile, Witt, a former Olympic figure skating champion in 1984 and 1988, represents Germany’s traditional dominance in winter sports. However, the Germans haven’t hosted the Winter Games since 1936 and the 46-year-old Witt is a symbol of a German athlete who hasn’t experienced the biggest winter event in her own homeland.

It may be difficult to judge who is a better figure skater, but it won’t be too long until we see who wins off the ice.