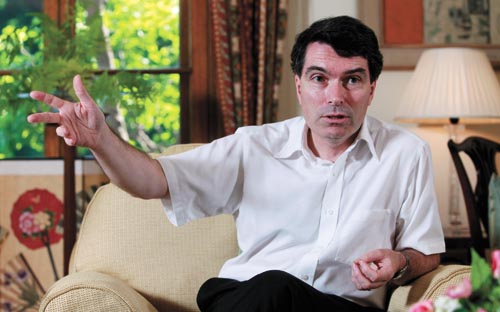 
Few would question that Martin Uden, the U.K. ambassador to Seoul, has been a good communicator during his three and a half years here.

He has appealed to the Korean public via his blog, explaining the policies of his country, expressing his affection toward Korea and sometimes providing a rare glimpse into North Korea.

In an interview with the Korea JoongAng Daily and the JoongAng Ilbo on Monday, Uden addressed the Korea-EU free trade agreement, aid programs for North Korean defectors and bilateral cooperation.

He also touched on bear bile farming, which has emerged as an issue in Korea.

Expected to leave by December, he fondly recalled his time in Korea, which he did not hesitate to call the best posting of his life.

Q. The Korea-EU FTA took effect last Friday. Which industries will benefit the most?

A. There will be many advantages in many of the manufacturing sides we have, so many of these small tariffs will be reduced, and that’s true for our auto industry in particular. After all, people think of BMW, Mercedes, but they often forget that there are Jaguars, Land Rovers, Minis, Rolls Royces and Bentleys. Of course it is also good for Korean automakers in the opposite direction.

There is concern that the FTA would enormously benefit the services sector, in particular the legal services industry that the U.K. is so good at. What is your opinion?

Liberalizing the legal service market certainly is important for British lawyers, but I think it is overdone in press coverage on this. After all, they will only be coming here to advise on non-Korean law. They won’t come here and start appearing in Korean courts - they won’t be qualified.

Can you tell us about the embassy’s English program for defectors?

It started last week. What we haven’t done yet is the internship. We’ve got about nine or 10 companies including myself prepared to take people as interns. I think it is important because they not only have this terrible disadvantage of not actually speaking English when they come down here, but they also have no familiarity with office work.

We also offer one postgraduate scholarship for someone to study in the U.K. He’s already been identified, and we are going to give him his certificate later this week.

Do you think the United Nations Security Council is still a relevant venue to address the North Korean nuclear issue?

One thing I would say about the role of the Security Council is it is important not to give up on it. You do sense that in [South] Korea there is such a realization that China and Russia often have different views on this, and can be difficult to go get things through the Security Council, but I think the key thing is not to give up. It is, after all, the body responsible for international peace-keeping activities. I am afraid I don’t really believe that the Security Council is going to be the one answer to the North Korean nuclear issue, although I would just recall that probably one of the highest points of collaboration in the security council on North Korean issue was actually after the last nuclear test when we did get a resolution through with Chinese and Russian agreement.

So it does show we can actually manage to do things there. It can happen. But the Security Council, after all, can’t really act as much of a mediator or negotiator; it is, after all, in the end, down to the parties involved - that is, I think, the six parties. Whether they do it in the current format, or they find another, I am not sure, but I think it is important we don’t leave this.

What is encouraging is all the parties are still trying to move forward on this. I think it is better trying.

Bear bile farming, although widely banned worldwide, is still allowed in Korea. A bill to stop the practice is sitting at the National Assembly, but it is uncertain how to regulate bear bile farming by Koreans overseas - in particular in Vietnam. What stance does the U.K. have on this issue?

What does Korea mean to you?

How could the U.K. help Korea raise its cultural credentials globally?

Cultural aspects give us tremendous recognition around the world. Some of the things you are coming to now in terms of how to promote a positive picture of Korea, it’s something, to be honest, I don’t need to do here. Shakespeare does it for me, Harry Porter does it for me, things like that. It comes naturally.

It’s right that Korea should look at that and see if you can learn. You haven’t got Shakespeare. You can’t invent things that exist, but you have got strength. I think traditional culture is tremendously vibrant and respected.

How to promote that internationally? You don’t know until you try. Give it a try. Because I think it is realized that it is such an important part of modern day life, this soft power, as we call it. Diplomats can’t do everything. These days, people-to-people links are just as important as anything I can achieve.