To July 17: InStyle magazine is releasing its 100th issue this July. To celebrate the occasion, the magazine has planned an exhibition featuring the private lives of 100 iconic Korean celebrities, including Daniel Henney, Lee Min-ho and Kim Tae-hee.

Exhibition information will be offered through iPhone and iPad apps. Profits from the exhibitions will be donated to build a children’s rehabilitation hospital.

To July 17: This is an exhibition by various Korean artists, signifying the kaleidoscope of life in the city.

The exhibition is titled “Depaysement - Blooming in the City.” Depaysement involves the surreal, in which familiar objects are portrayed in unfamiliar places. The works of art on display here portray Seoul as a “depaysement” city. Like depaysement, Seoul is made up of unfamiliar and often unprecedented factors.

History has made this city a diverse and many-sided one. Despite rapid urbanization, Seoul has a different persona compared to the West and is still growing differently. In this exhibition, the subtitle, “Blooming in the City,” indicates that divisions and various facets of our city are only just beginning to bloom. Blooming, in turn, represents Seoul as a fickle and ever-changing city.

To July 31: This is a solo exhibition by Korean artist Back Seung-woo, who is known for contrasting reality and cyberspace through his work, in which photography is the main medium.

The artist does not offer answers but rather questions the elements that constitute a picture - whether in the form of a photograph, image or concept - and the way these elements are all brought together to portray the world.

The works, both recent and unpublished photographs, do not aim to capture reality as it is. Rather, they capture the gap between the real and the imaginary and the visible and the invisible via modifications and reconstructions.

And in one project on view, the artist combines his photographic series “Utopia” into a single, large photograph that will be divided into 13 pieces and sent to 13 different countries, where it will be printed and assembled again.

Back received a master’s degree in fine arts and theory from Middlesex University in 2005. The artist has participated in group exhibitions in both England and Seoul since 2000, and was nominated for the Prix Pictet Prize in 2009. 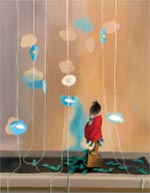 To July 17: This is a solo exhibition of artist Kong Shine, whose prime focus in her recent works has been the subject of relationships.

The titles of her works are “Neighbirds,” “Between,” “Friendship” and “Intruder.” In her works, birds, fish, trees and metal acknowledge each other; two different vases give bloom to the same flower; black charcoal and white toilet paper are connected through a lifebelt. Kong Shine pairs these objects, symbolizing her point that the world in which we live is centered on relationships, including the way suffering is woven into the essence of life. By this logic, the artist suggests that life accompanies suffering.

Shine’s work goes through a process of materialization as she bestows a three-dimensional body to forms in her mind.

The act of materializing forms from the mind is a mystery performed by many painters, which includes Shine.