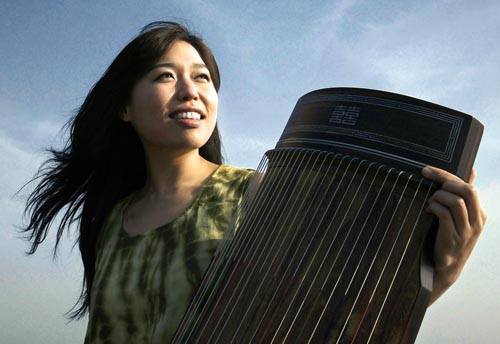 Saturday: Jung Mina is a versatile gayageum (traditional Korean zither) musician who is celebrating the release of her third album, “Oasis,” which she produced and composed.

While her critically acclaimed second album was a collection of instrumental songs - mostly jazz - her new work is a vocal album that tells her story through songs such as “Jumeokbap,” which tells of how she once made and sold jumeokbap (rice balls) at a subway station exit but the small business soon went bust.

Theater Zero, Hongdae near the Park

Saturday: The Super Sketch series is a hookup between artists and musicians organized by Super Color Super. Every event brings the artists, the bands, the audience and the party together through the prism of a special concept or theme.

This event features performances ranging from transparent puppetry to watercolor compositions displayed through classic classroom overhead projectors and multiple overhead hanging screens, in time with live music. There is also an art market that runs all night long.

Featured bands include Trampauline, Wagwak, On Sparrow Hills and more, along with a slew of independent musicians.

July 19 and 20: Fusion rock/jazz trio the Aristocrats is coming to Korea for the first time.

Before coming together to form the trio, all three members - guitarist Guthrie Govan, bassist Bryan Beller and drummer Marco Minnemann - worked with famous bands and musicians.

Govan was the guitarist for the English band Asia in the ’80s and was named guitarist of the year by Guitarist magazine in 1993. Beller has worked with members of the American progressive metal band Dream Theater and Chris Wolstenhome, the bassist of English rock band Muse. Minnemann has worked with Mr. Big’s Paul Gilbert and was featured on the cover of Modern Drummer magazine in 2007.

To Saturday: Probationary Theatre presents “Some Girls” by Neil LaBute in its new Itaewon venue, the first performance space dedicated entirely to English-language productions in Seoul.

July 16: The Korea National Ballet is practically giving away tickets for this performance, which features highlights from “Giselle” and Spanish classic “Don Quixote,” in a lottery on its Web site.

Saturday to July 23: This festival celebrates gugak (traditional Korean music) with performances by some of Korea’s finest traditional groups.

Japanese-Korean composer Yang Bang Ean presents his impressions of Jeju in his solo concert on Saturday at 3 and 7 p.m. Multi-instrumentalist Baramgot performs on July 14 at 7:30 p.m., GongMyoung uses 30 bamboo instruments in his concert on July 16 at 7:30 p.m. and percussion group Dulsori present their energetic mix of music and theater on July 19 at 7:30 p.m.

Kim Hong-do, also known as Danwon (Kim’s pen name), is renowned as the first late Joseon Dynasty painter to extensively and realistically portray scenes of the daily lives of the common people. His paintings, such as “Mudong” (“Dancing Boy”) and “Ssireum” (“Korean Wrestling”) are known throughout Korea.

The festival is set in the luscious Jisan Valley and offers a great weekend to mix and mingle with people from all over the peninsula as well as to eat, drink and be merry.

Pentaport is also known as something of a showcase for underground Korean bands, too, and this year is no exception. No Brain and Vidulgi OoyoO will be there. The festival site, Incheon Dream Park, is a former landfill and is only 20 miles from downtown Seoul.