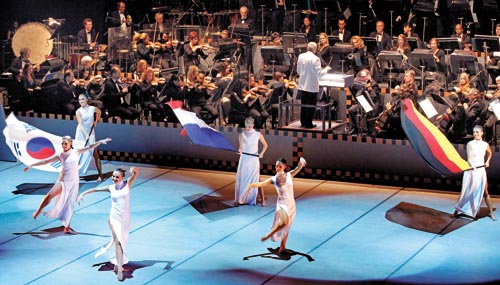 Dancers perform with the national flags of the 2018 Winter Olympics candidate cities yesterday at the 123rd International Olympic Committee (IOC) General Assembly, in Durban, South Africa. IOC members voted for the host of the 2018 Winter Games after the three candidates - Pyeongchang, Korea; Munich; and Annecy, France - each made a 70-minute final presentation at the International Convention Center. Pyeongchang gave its presentation last. Pyeongchang, which failed in its two previous bids, hoped to be the first Asian host outside of Japan to hold the Winter Games. The host city was announced by IOC President Jacques Rogge at midnight yesterday, Korea Standard Time. [YONHAP]