Cosmetics maker blots out the competition

Cosmetics maker blots out the competition

Whenever Choi Jin-young goes to Myeong-dong, the biggest shopping district in central Seoul, to buy cosmetics, she makes it a rule to check the product descriptions first. When she finds a product with the tag “Produced by Korea Kolmar” she knows she has found what she’s looking for.

“I feel relieved when I see that a product has been made by Korea Kolmar because it is a very trustworthy company that guarantees the quality of what it produces,” said the 32-year-old fashion industry worker who enjoys comparing and blogging about so-called low-cost cosmetics brands.

If you are wondering what Korea Kolmar is, you are not alone. A brand awareness survey conducted this year showed that only slightly more than six of 10 ordinary Koreans said “yes” when asked if they knew Korea Kolmar. In comparison, more than nine people responded in the affirmative to the same question when the question referred to more heavily marketed cosmetics brands such as L’Oreal.

Despite its lower brand recognition, the Kospi-listed Korea Kolmar has been behind several hundred cosmetics brands since 1990, producing either all or part of the brands’ product lines. It is Korea’s No. 1 cosmetics manufacturer and is responsible for almost one third of all cosmetics sold in this country, followed by second-tier latecomer Cosmax, which accounts for one fifth of the market.

The reason the company has gained so little recognition in comparison to its market share is that it owns no brand of its own. It also contracts directly with clients and pledges not to advertise or reveal client names to the media.

“Even though fledgling firms may want a boost on the back of consumers’ confidence in us, major cosmetics firms tend to prefer that we remain behind the scenes,” said Lee Byung-ho, marketing director of Korea Kolmar. 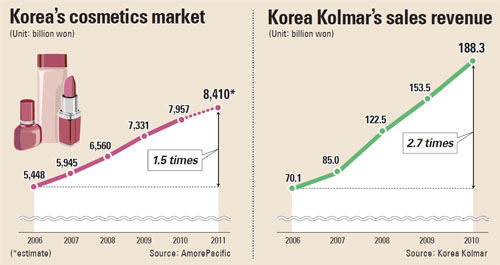 Nevertheless, Korea Kolmar is a major player in the Korean cosmetics market. Its client list includes low-cost cosmetics brands such as Missha, The Face Shop, Innisfree, Nature Republic, Etude House, VOV and Too Cool for School as well as multinational companies such as L’Oreal and Johnson & Johnson. Korea’s two largest cosmetics firms - AmorePacific and LG Household & Health Care - also rely on Kolmar for a minor portion of their products, although these companies develop and manufacture the majority of their goods at their own production facilities.

Korea Kolmar operates on a unique business model that it was the first to bring to Korea. Under the model, Korea Kolmar functions as the original design manufacturer, or ODM.

In this system, the ODM is responsible for the entire production process before a product reaches the shelves - from product planning and design to research & development, manufacturing, quality control and shipping.

Like the majority of other low-priced cosmetics brands, Too Cool for School does not have its own factory, meaning it relies completely on outsourcing for manufacturing as a way of cutting costs.

According to the Korea Food and Drug Administration, Korea had more than 900 cosmetics manufacturers as of late 2008, the latest year with related data available. Among those companies, Korea Kolmar and Cosmax are the only firms with annual revenues of over 100 billion won ($94.04 million).

Korea Kolmar did not originally start as an original design manufacturer. When its founder and chairman, Yoon Dong-han, launched Korea Kolmar in 1990, he initially opted for an “original equipment manufacturing” strategy - in which field the firm’s investor and business partner, Japan Kolmar, an affiliate of Kolmar Group in the United States, was a leader at the time.

Like a factory, an original equipment manufacturer makes a company’s goods with the product specifications provided by the client, whereas an ODM takes a more complete approach to the production process.

Japan Kolmar still owns a 15.34 percent stake in Korea Kolmar as its second-largest shareholder. The top shareholder is Yoon with 15.53 percent.

The two firms still share around 5 percent of each other’s core technologies and exchange research on a regular basis, according to Korea Kolmar marketing director Lee.

“ODM requires a relatively smaller initial investment,” he said. “But as revenue picked up after a few years, relying on larger cosmetics brands’ supply orders was not enough.”

Products line the walls at Too Cool for School, shown at left, and customers browse a Nature Republic store in Myeong-dong, central Seoul. The companies are two of the most recently launched low-cost cosmetics brands in Korea and both rely on Korea Kolmar for product development and production. Provided by the companies


Although Korea Kolmar suffered briefly in the late 1990s, with the eruption of the Asian currency turmoil in 1997, it rebounded following the emergence of the nation’s first generation of low-priced cosmetics, Missha and The Face Shop, in the early 2000s.

The two brands are the first in Korea to focus on sales and marketing while relying entirely on outsourcing - mostly to Korea Kolmar and Cosmax - for production. Inspired by the brands’ success, more than a dozen cosmetics firms have since sprouted like mushrooms. Adopting the same strategy of hiring ODMs, these new companies eventually sparked the rise of low-cost cosmetics companies.

The market size by retail price of low-cost brands, which stood at 500 billion won in 2005, has posted an annual average growth of 27.7 percent in the past five years to reach 1.7 trillion won last year. In the same period, the Korean cosmetics market grew an average rate of 9 percent on-year.

The portion of ODM-based products at Korea Kolmar has expanded in the past decade to account for 97 percent of the cosmetics goods it makes now, with only 3 percent consisting of products made with the OEM strategy.

“We trust the technology and researchers at Korea Kolmar since we know it has developed and manufactured quality cosmetics for a long time,” said Seo Jin-kyung, a PR manager at Nature Republic, when asked the reason the year-old brand chose the supplier.

On top of the surge in business from low-priced cosmetics brands, new demand has arisen from TV home shopping channels, discount store chains and local makeup artists that are now rushing to launch their own cosmetics labels. Korea Kolmar produces a major portion of the products for the skin care brand Raw, which was launched by renowned makeup artist Cho Sung-ah late last year.

Another factor that distinguishes Korea Kolmar from its competitors is that it also operates a pharmaceutical business, which accounts for 30 percent of its total revenue.

Its pharmaceutical division, which specializes in beauty and health products, supplies 5 billion won worth of cosmetics annually to three major dermatology hospital chains with their own cosmetics brands.

Boosted by these growth factors, Korea Kolmar’s sales revenue more than tripled to 188.3 billion won between 2005 and 2011.

Korea Kolmar is now preparing to enter China, the world’s third-largest cosmetics market after the U.S. and Japan, and it already has a head start. The company has manufactured products for both Chinese and Korean brands at its factory in Beijing since June last year.

In China, Korean brands made at the factory are sold with a “Made in China” label, which helps lower retail prices. The same is true of some P&G and L’Oreal products made and sold in Korea.

“Its entry into China, added to a well-balanced portfolio comprised of cosmetics and pharmaceutical divisions, has brightened the potential for Korea Kolmar’s long-term growth,” said Kang Hee-seung, an analyst with Shinhan Investment Corp.

Given that the popularity of low-cost Korean cosmetics brands such as The Face Shop and Innisfree has risen sharply in China, Korea Kolmar is expecting to see its slice of the market grow, according to Kim Young-geun, an analyst with KTB Investment and Securities. No market share data is available yet.

The growth potential for Korean cosmetics in China is also indicated by the fact that per-capita cosmetics consumption there still stands at 14 percent of Korea’s. And experts predict that as the income level in China climbs, consumption is expected to follow suit.