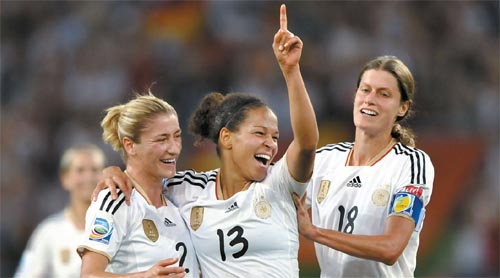 Germany’s Celia Okoyino Da Mbabi, center, celebrates with her teammates during the third round Group A match against France at the FIFA Women’s World Cup Germany 2011 in Monchengladbach. Germany won 4-2. [XINHUA/YONHAP]


BERLIN - Hosts Germany will join England, Japan and France in the quarterfinals at the Women’s World Cup following Tuesday’s 4-2 win over the French, who had the first player sent off at Germany 2011.

France goalkeeper Berangere Sapowicz was given her marching orders for a dangerous tackle on Germany’s Fatmire Bajramaj midway through the second half in Monchengladbach as the Germans picked up their third straight win.

A strike from Kerstin Garefrekes, two goals from Inka Grings and a last-gasp Celia Okoyino da Mbabi effort saw Germany win the tournament’s highest-scoring match with Marie-Laure Delie and Laura Georges getting two back for France.

But both coaches were furious with Finnish referee Kirsi Heikkinen, who handed out five yellow cards in addition to Sapowicz’s red.

“I think it was overdone,” said Germany coach Silvia Neid.

“[France coach] Bruno Bini got really worked up because he got three yellow and one red. You didn’t dare to do anything after that. I think it was too much.”

The Germans, who are bidding for their third straight World Cup title, will now play Japan in Wolfsburg on Saturday in their quarterfinal match after Japan’s 2-0 defeat to England in Group B.

As Group A runner-ups, France play Group B winner England on Saturday in Leverkusen in their quarterfinal.

England’s Ellen White gave the Three Lions a great start against Japan in Augsburg with a goal in the 15th minute before Rachel Yankey sealed victory 66 minutes in.

In the day’s other matches, New Zealand earned a dramatic 2-2 draw with Mexico in Sinsheim after the equalizer came with the last kick of the Group B game as both teams took their final bow at the 2011 Women’s World Cup.

Mexico led 2-0 after 30 minutes thanks to Stephany Mayor and Maribel Dominguez, but the Kiwis hit back as captain Rebecca Smith scored with time almost up before teenager Hannah Wilkinson levelled in the 94th minute.

And Nigeria also signed off their campaign with a win after beating Canada 1-0 in Group A as both teams took their World Cup bow in Dresden.

Nigeria reacted fastest following a 10-minute-long power-cut towards the end of the second half as midfielder Perpetua Nkwocha scored the winner in the 84th minute when the lights went back on.