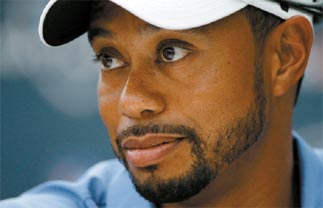 JACKSONVILLE, Fla. - Those “minor” injuries to his left leg now have kept Tiger Woods from playing in two majors.

In an announcement on his Web site Tuesday that came as no surprise, Woods said he would skip the British Open next week because his injuries have not fully healed.

“Unfortunately, I’ve been advised that I should not play in the British Open,” Woods said. “As I stated at the AT&T National, I am only going to come back when I’m 100 percent ready. I do not want to risk further injury. That’s different for me, but I’m being smarter this time.

“I’m very disappointed and want to express my regrets to the British Open fans.”

It will be the second time in the last four years that Woods has missed two majors in one season. He did not play the British Open or the PGA Championship in 2008 while recovering from reconstructive surgery on his left knee.

These injuries are not as easy to describe. Woods said in May that he suffered “minor injuries” to knee ligaments and his Achilles while hitting from an awkward stance in the pine straw on the 17th hole in the third round at the Masters. Afterward, he skipped the Wells Fargo Championship and withdrew after nine holes from The Players Championship a week later.

Woods said last week it was a mistake to go to The Players, and that had he waited, he would be playing golf right now.

“In hindsight, I probably shouldn’t have competed at The Players, but it’s a big event, and I wanted to be there to support the tour,” he said.

Woods didn’t say whether he expected to play in the final major, the PGA Championship, which starts Aug. 11 at the Atlanta Athletic Club. As he mentioned last week at Aronimink golf club in Newtown Square, Pa., he doesn’t have any idea when he will compete next. He said he has not hit golf balls since May 12.

Woods also indicated at Aronimink that his chances of playing the British Open were remote - taking some surprise out of Tuesday’s announcement.

“I wouldn’t go over there just to show up,” he said. “I’d go over there to win the golf tournament, so I need to obviously get my body ready so I can practice and eventually play.” Woods was replaced at Royal St. George’s by Jason Dufner, who said on Twitter, “Looks like I am getting in the open championship, I am excited!”

Brendan Jones was the next alternate, but told the Royal & Ancient he would not be able to play because his wife is expecting their first child.

“It’s unfortunate for the game of golf and it’s more unfortunate for him,” three-time major champion Padraig Harrington said. “He still is the name we would look out for the most. It’s not that we want him to turn up and win, but it would be nice to have him there and bring the buzz he does. Let’s just hope it’s not that bad - it’s a long time for that injury - and that he fully recovers.”

Woods called R&A chief executive Peter Dawson to personally tell him he would not be playing.

“I know how disappointed Tiger is not to be able to play in the Open this year,” Dawson said. “Naturally, we are sorry that a player of his caliber isn’t able to join us at Royal St. George’s, but we wish him well in his recovery and hope to see him back soon, competing in front of the fans that love to see him play the game.”