A family feuds in comic fight for fortune

A family feuds in comic fight for fortune 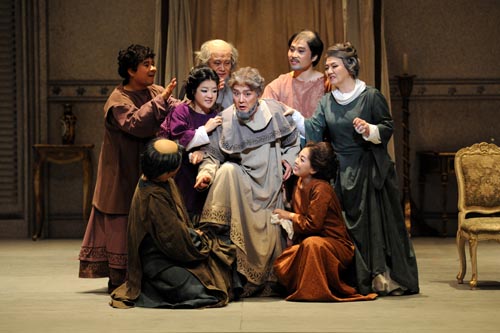 
If you think operas are too long and difficult to understand, think again.

“Gianni Schicchi” is a simple, comedic opera in one act by Italian composer Giacomo Puccini that opened Wednesday and runs through Sunday at the Sejong Center for the Performing Arts in central Seoul.

The opera is based on a part of Dante’s “Divine Comedy” and is the third part of Puccini’s “Il trittico” (“The Triptych”).

The story, set in Florence in 1299, follows the events after the death of the rich aristocrat Buoso Donati and the dispute amongst his family over his wealth. Meanwhile, there is romance brewing between Rinuccio, a relative of Donati, and Lauretta, the daughter of Gianni Schicchi, a commoner and the city’s charismatic problem-solver.

Donati, as it turns out, is rumored to have left his entire fortune to a monastery, causing the family to scramble to find his will so they can verify the truth. When Rinuccio finds the will, he asks for permission to marry Lauretta and the family agrees because they think they’re going to be rich. When they actually read the will, however, they discover the money will indeed be given to the monastery and they vow to reclaim the fortune. In their panic, they withdraw permission for the marriage.

As they search for a way out of their predicament, Rinuccio proposes they turn to Schicchi for advice, though no one really likes the idea. He decides to help so that his daughter can marry the man she loves.

Schicchi’s plan is to disguise himself as the recently deceased Donati and pretend to be alive when the doctor arrives to verify the death. As Donati, he will create a new, fake will that gives each family member what they want. But when the notary arrives, he bequeaths the most valuable things to himself, knowing that whoever reveals the scheme will have their hand cut off, based on an agreement they all made before the ruse began. Schicchi ends up a rich man and his daughter and Rinuccio are now free to marry.

The plot is full of silliness, tempered by the star-crossed romance between the two young lovers. And when Lauretta learns that she and Rinuccio will not be able to marry, her impassioned plea in the aria “O mio babbino caro” (“Oh, My Dear Papa”) tugs at the heart.

Although it was written almost a century ago, the plot is still relevant today, since there are still many families that fight over who gets what when a family member dies.

On Saturday, the father-daughter team of baritone Kim Gwan-dong and soprano Kim Ji-hyun perform in the lead roles.