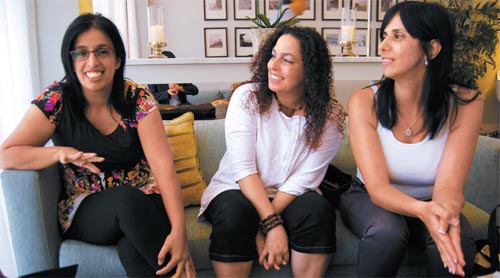 
TEL AVIV- As the Korean culture wave known as the Hallyu moves outside of its sphere of influence in Asia, it is becoming increasingly popular in ever more far-flung regions of the world.

Proof of its popularity outside Asia was evident last month during a meeting between more than 130 Israeli fans of Korean culture and Korean Ambassador to Israel Ma Young-sam. The meeting had been organized by a core group of K-pop fans.

According to officials of the Korean Embassy in Israel, Ma was treated like a celebrity. The officials said this seemed to surprise the ambassador, even though he is already recognizable in the Israeli media, having made occasional appearances on local television programs to promote Korea.

After the meeting, three of the fans met with the Korea JoongAng Daily in Tel Aviv on July 1 to talk about their love for Korean culture and its appeal in Israel.

The three fans - Limor Lechniak, 39, Nomi Poraty, 43, and Nomi Adi, 45 - seemed to have a particular affinity for Korean dramas, which they said had taught them about everything from culture and food to language and geography.

“Although I’ve never been to Mount Halla, Jeju or Busan, I have learned more about them through the dramas,” Poraty said. “It’s very nice.”

They said they especially appreciated the scenes showing mealtimes in Korea, because it allowed them to see what Korean food is like.

Group members said they search the Web for information on the food they see on the shows. Lechniak even said she has been trying to cook some of the dishes with a Korean recipe book that she had brought with her to show.

This small group is not alone in their love for K-pop. They reported that more than 1,000 Israeli people share Korean dramas and music through the Internet almost in real time and said that some of the content is posted to the sites only a few hours after its aired in Korea.

For these fans, however, the dramas serve up more than food.

The three fans seemed especially impressed that Koreans in the dramas still maintain a respect for the elderly, a value they said they thought Israelis are losing.

“When I was young, we behaved like that with our grandfathers and grandmothers, but today, it’s not the same,” Poraty said. “Respect, it’s nice. We shouldn’t be too strict about it, but we should keep it.”

They also talked about the sense of sweetness in the romantic relationships depicted in Korean dramas. Poraty said it is different from Israeli or Western dramas, where the main characters seem to head to bed so quickly.

“It’s so nice to see how love develops in Korean dramas,” Poraty said.

“I was watching one Korean drama, and waited until the last episode, when I thought they would kiss, but there wasn’t one,” Lechniak said with a laugh.

It’s not that all Korean dramas are so sweet, they said. Many Korean dramas or films are dark, gloomy and violent, something they said many Israelis find it difficult to relate to. And sometimes, they said, a dark aspect in fiction turns into reality with some Korean celebrities suddenly committing suicide.

The three fans mourned the death of the celebrities, including actor Park Yong-ha, who had committed suicide exactly one year before the day of the interview. Poraty remembered the date. “Actually, it was one week of crying and being angry,” she said, recalling that time. “I still talk about him a lot with friends, but I still don’t understand it. I know his father was sick and he had depression, but everything is still - why?”

Aside from Korean dramas, all three said they are also avid fans of K-pop. Adi said she had even traveled to Paris in May for the first K-pop concert in Europe with her daughter, who is a fan of SHINee, a five-member boy band.

In this way, culture is becoming a window to Korea for Israelis, officials of the Korean Embassy in Israel said.

Building on this connection, the embassy, in conjunction with the Korean Ministry if Foreign Affairs and Trade, is planning to host a series of cultural events in cooperation with the Israeli government in April 2012 to mark the 50th anniversary of diplomatic ties between the two countries.