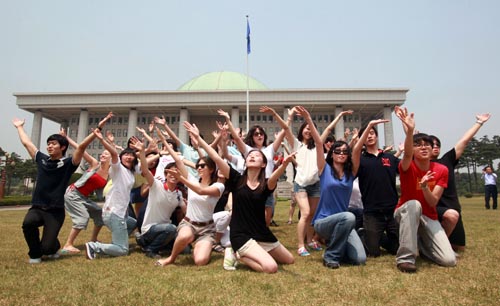 Members of various human rights groups perform as part of a flash mob demonstration on June 20 in front of the National Assembly, organized to raise awareness about the plight of refugees in Korea. The event was organized by Gong-Gam, the first public interest lawyers’ group in Korea. By Jeon Min-gyu


Last month, a large group of people gathered at the National Assembly to dance. But it wasn’t a party. The event was the culmination of several flash mob demonstrations organized in multiple locations around the city to raise awareness about World Refugee Day and commemorate the 60th anniversary of the UN Convention Relating to the Status of Refugees.

The demonstration was co-organized by Gong-Gam Korean Public Interest Lawyers’ Group, the first group of lawyers in Korea to represent social minorities in Korea, in conjunction with several other human rights organizations.

It was just one of the many activities for which the group has gained attention in recent years, both in Korea and abroad, as it strives to build support for its cases and the causes of the people it represents.

“‘Gong-gam’ means sympathy and empathy in Korean,” said Hwang Pillkyu, one of the group’s eight lawyers. “We are proud of our name because it represents our goal of networking with the people we want to work with - minority groups, related organizations and anybody who wants to take part in our work.”

Gong-Gam was established in January 2004 by lawyer Yeom Hyung-kuk. Yeom drew inspiration from a speech given the previous year by Park Won-soon, a well-known civic activist and human rights lawyer, who spoke about the importance of representing the public interest. Park urged his fellow attorneys to join him in his work.

“We don’t have a hierarchy among us,” said Hwang. “That’s why we call ourselves a ‘group’ instead of a ‘firm.’”

The group has gained recognition in Korea and the international community, and its unpaid internships are now prized positions that attract people from countries like Australia, the United States and Hong Kong.

The lawyers work long hours for little pay, splitting their time between the law and advocacy work. Fellows and interns work two to three days a week for a small stipend or on a volunteer basis.

“Twenty-four hours are not enough for us,” Hwang said. “We visit government offices with our clients or go out to give lectures as much as we stay in to study cases.

Public interest law is not lucrative by any means, and Gong-Gam subsides solely on grants and donations from individuals. It does not charge legal fees or retainers and last year it went into debt for the first time since its founding.

Later that year, however, the group got a much-needed boost in the form of a one-year grant from the Beautiful Foundation, a non-profit organization that organizes and facilitates campaigns to promote the public interest.

“We are the only group of lawyers in Asia whose budget depends solely on grassroots donations,” Hwang said. “That allows us to remain independent from outside influences and involve more people in building Gong-Gam.”

One of the biggest challenges Gong-Gam faces is the public’s perception of the group.

“People either praise our work as saintly or ask sarcastically, ‘So when are you going to run for office?,” Hwang said. “In the future, I hope human rights law can be regarded simply as another field of law.”

The group also has to contend with bias against its clients.

“Often, it doesn’t feel like we’re making any progress,” Hwang said. “Winning individual cases are the small victories that keep us going. But we are devastated whenever we encounter evidence that the public regards minorities such as immigrant workers as a social evil.”

To raise awareness of the human rights of social minorities, Gong-Gam lawyers regularly offer human rights law workshops for university students, civic organizations and the public. Gong-Gam also collaborates with law schools in countries such as Australia and the United States as well as with international organizations like the Asia Pacific Refugee Right Network. In the future, it plans to advocate more actively for minorities in Asia and people outside Korea whose rights have been violated by Korean firms.

“We are happy that we have so much work,” Hwang said. “We enjoy empathizing with many different kinds of people in Korea. That is what keeps us going.”