Should news anchors show their emotions?

Should news anchors show their emotions? 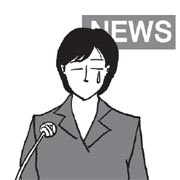 Glenn Beck is a television show host known for his conservative views even on the Fox News Channel. On March 13, 2009, he wept on air saying, “I just love my country.” He once created controversy for describing President Barack Obama as someone having “a deep-seated hatred for white people, or the white culture.”

Later, Beck explained his tearful remark: “I am not a journalist. I’m just a guy who cares. I’m sorry. I’m just a guy who cares an awful lot about my country.” However, his breakdown on air continued to be a subject of debate. News anchors sometimes lose their composure when delivering news on massacres, natural disasters or wars, but not many anchors shed tears appealing for patriotism. Beck’s weeping was parodied on YouTube, ridiculing the incident as “crocodile tears.”

There is another famous news anchor who failed to control his emotions and created controversy, though it was not tears this time. On Sept. 11, 1987, legendary CBS news anchor Dan Rather walked out of the studio during a live program and did not return for six minutes. Pope John Paul II made a visit to the United States, but the report on the pope was cut to broadcast a U.S. Open tennis match. Rather was so angry that he stormed out of the newsroom.

The tennis match was over sooner than expected, and Rather’s news show resumed, but his seat was empty for six minutes, broadcasting dead air. Networks all over the United States airing the CBS news segment received countless inquiries asking what had happened to Rather. Dan Rather was such a big anchor that his job was not affected at CBS. However, the incident was cited again and again whenever he failed to control his anger or frustrations.

A Korean anchorwoman was so moved when Pyeongchang won the bid to host the 2018 Winter Olympics that she showed tears as she delivered the exciting news. Some criticized her for lacking the self-control expected of a news anchor. But many viewers said they shared the emotional moment as tears of joy streamed out of their eyes, too.

Anchors like Walter Cronkite, who almost never lost his composure during any situation or crisis, were welcomed once, but it is not the only style a news anchor should model themselves after. Lately, more and more viewers relate to anchors and news hosts who share their feelings with the world. As long as the emotion is shared by the majority of the viewers, no one would argue that the anchor is neglecting his job.