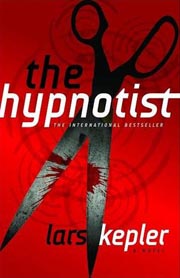 Winter nights are long and cold in Stockholm. Their chill permeates some recent Swedish fiction.

Another, Lars Kepler, is a publishing success in Europe, and is now looking to hook readers in the United States and other countries for a planned eight-book series.

Kepler’s first novel, “The Hypnotist,” is set in the weeks before Christmas as police investigate the bloody massacre of a family. A therapist who has not practiced hypnosis for years interrogates a young survivor, but events in his own past soon complicate the story. More violent mayhem ensues.

Kepler is the pseudonym of a couple, Alexander and Alexandra Ahndoril, who write modernist and historical fiction when not spinning macabre crime tales. Their series centers on police detective Joona Linna, one of the heroes of “The Hypnotist,” which is soon to be a Swedish-language movie directed by Lasse Hallstrom.

The co-authors told Reuters about their secret identity, the appeal of crime fiction, and why their three daughters are not allowed to even see their parents’ books.


Q. Hello. Who am I speaking with?

A. We are speaking as Lars Kepler. We are writers in our own life, but we write totally different books. We wanted to signal that this was a different genre for us, a different voice. We were secret at the beginning but it only lasted three weeks. Everybody knows it’s us. Lars Kepler has taken over now. There hasn’t been any time for our own writing. We met 19 years ago and we tried to work together as writers but we just kept on fighting. So inventing another writer and choosing another genre, crime fiction, was a big thing for us.

How do you divide the work?

We start with a storyboard, just like a film script. We write everything together. We sit beside each other. You can’t pick out a single sentence that only one of us wrote. The key was that Alexander’s brother is a professional hypnotist. We wanted to write a story that fulfilled all the demands of the genre. Many crime novels are about understanding behavior that is terrible. We thought it would be exciting to have a hypnotist because he goes inside the heads of people. Maybe he will find something that he didn’t want to.

Much of the book’s horror derives from tension between parents and children. Is that a theme you wanted to emphasize?

Yes. “The Hypnotist” is about family constellations, bonds between family members that aren’t always so nice. We have three daughters, and we wrote about what scares us the most: something happening to our children, or our children growing up to become bad persons.

Have they read the book?

They are too small. They aren’t even allowed to look at the book.

Your American edition has bloody scissors on the cover.

The Swedish cover shows a crime scene, with blood on the floor, a foot. It’s too scary for them.

What do you hope to achieve with the series?

We are right now writing the third book. The second book came out in Sweden last summer and it’s all over Europe. You can read each book by itself. For the whole series, the detective inspector is the main character. Our ambition is to write a really good story that’s very exciting but we also want to say something about the world we live in. These are violent books. In crime fiction, you can turn the world right in a way. It’s a positive genre. You can separate the bad from the good. You can have heroes. Violence surrounds us. Our second book is about the weapons industry.

What literary detectives have served as models?

We really like the detective in William Peter Blatty’s book of “The Exorcist.” That detective is fantastic. He’s annoying all the time, asking questions, but he’s so clever. He has also a very painful past that is haunting him. We are all afraid of darkness yet we pretend we’re not, especially writers. In some ways, writing a crime novel is a way to control your fear for a while. You can stop the perpetrator. In that way, it’s optimistic.

How has Stieg Larsson’s success affected other Scandinavian novelists?

He opened doors. The “Lars” in Lars Kepler is an homage because he didn’t live to see his books published, a very scary thing for a writer. It has created interest in Swedish literature.

Can you recommend other Swedish authors beyond crime stories?

(They can try) Kerstin Ekman. P.O. Enquist is a good modern writer. Crime fiction is like a motorway, but there are smaller, more narrow paths beside it. We are all in a way influenced by the crime tradition.