The people behind the aid trickle to the North

The people behind the aid trickle to the North 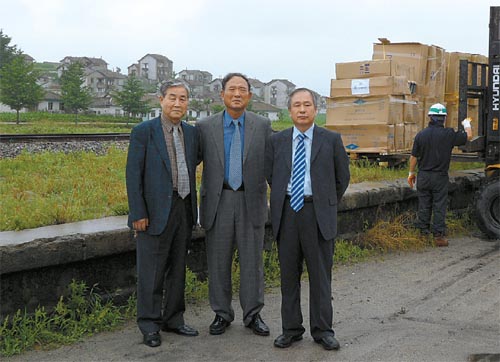 
Since March 31, Seoul has only allowed a minimal amount of charity to be sent into North Korea, largely for children and the disabled.

One of the few civil groups allowed to send aid is the Lighthouse Foundation, a nonprofit and nongovernmental organization founded in May 2004. To shed some light on the current state of South Korean aid to the North, the Korea JoongAng Daily sat down with Jang Chang-man, chairperson and general secretary of the Lighthouse Foundation, to see whether he thinks civil groups will get more breathing space in the future to resume aid to the North.

Aid going from South to North is now at its lowest level in years. Humanitarian aid during the current Lee Myung-bak administration has totaled 216.6 billion won ($205 million), compared to 1.2 trillion in the Roh Moo-hyun administration and 341 billion in the Kim Dae-jung time.

The Lighthouse Foundation’s most recent project was to send 50 million won worth of goods including powdered milk, crutches and wheelchairs to North Korea for children and the disabled. On June 30, four representatives from the foundation and their sponsors travelled across the inter-Korean border to deliver the goods.

“It was a very rainy day,” said Jang, who was on the trip. “We reached Pongdong Station with the goods in two trucks and we had to cover them with sheets of plastic after we reached our destination.”

Pongdong Station, Jang explained, is often used by aid groups as a meeting point with North Korean officials. The Lighthouse Foundation team was met by representatives of the North Korean Council for National Reconciliation and Cooperation.

Their faces were familiar. When aid comes from South Korea, the North assigns the same workers to deal with the civil group’s representatives.

“Almost every time, the workers have been the same,” Jang said.

Before they actually crossed the border with the aid, the foundation had a May 31 meeting with North Korean officials to discuss what goods would be sent and how they would be distributed. Distribution has become a very sensitive issue on both sides. Seoul does not want the charity to be diverted to the North Korean military.

“The Ministry of Unification has emphasized to private groups sending aid the importance of transparency when it comes to distribution,” said Cho Il, general secretary of the Lighthouse Foundation.

Repeated questions about the distribution “irked” North Korean officials, the foundations says, and they protested during both meetings that the goods would be fairly distributed.

“You can tell that they bluff a little when they talk,” Jang said. “You can really sense their pride [during conversation].”

Upon the foundation’s request for follow-up trips to orphanages and centers for the disabled to confirm the distribution, “they asked us whether it was really necessary to visit all of the centers, as it was just powdered milk for children,” said Cho.

Cho was also informed by the North Korean officials that they “couldn’t do much else” with the goods for the disabled, meaning they would be difficult to sell on the open market. “The North Koreans are people too and wouldn’t they feed their own people?” asked Cho.

The foundation saw goods they sent over in April, such as shampoos and fabric for clothes, being used at rehabilitation centers for the disabled in the North a few weeks later.

The civil groups don’t talk politics or ideologies on their visits to the North, but they’ve noticed that their minders know a lot about them personally. They have “all personal information on us when we visit,” said Jang, who has a church following in Seoul. “They asked me to pray during our April visit before a meal,” Jang recalled. The request surprised him, and he asked whether praying was even allowed in the North.

The reply from one of the officials: “Our founder Kim Il Sung asked Billy Graham to pray before they ate when Graham was visiting North Korea.”

Asked whether he thought North Koreans had religious faith, Jang replied, “No one can know that for sure. It’s likely they’ve learned about South Korean customs because they have interacted with many of us,” said Cho. “They even talk about ideas from the bible.”