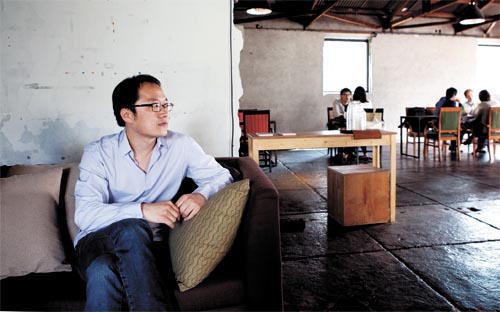 Producer-turned-filmmaker Kim Jae-hwan talks about his documentary “The True Taste Show,” which exposes the truth behind how famous restaurants are created by broadcasting stations, brokers and restaurant owners. His documentary has stirred controversy and opened a new chapter in documentary filmmaking in Korea. Provided by B2E


Producer-turned-filmmaker Kim Jae-hwan became an overnight sensation when his documentary, “The True Taste Show,” hit theaters in May. But more importantly, he has changed the landscape of documentary filmmaking in Korea.

His film exposes the ugly truth behind how famous restaurants are created by restaurant owners, broadcasting stations and brokers. It was the first documentary in Korea to take a hard look at corruption in the broadcasting industry.

The film premiered at the Jeonju International Film Festival in early May and two screenings were enough to bring the film to theaters nationwide. Although most films are released about a year after they premiere at film festivals, it took just a month for the “The True Taste Show” to achieve the same.

Among critics, Kim has won acclaim for his willingness to take risks, inviting comparisons to American filmmaker Michael Moore, whose films “Bowling for Columbine” (2002) and “Fahrenheit 9/11” (2004) were popular at the box office despite remaining controversial.

Kim said he knew he wanted to make a documentary about the broadcasting industry, and said he chose to focus on restaurants because it was an accessible topic.

“Everyone is interested in food,” he said. “And I wanted to show what happens when the media betrays its true nature.”

Dozens of Kim’s staff were involved in the production and all were required to sign nondisclosure agreements saying they wouldn’t reveal anything about the project until the film was released.

In addition to exposing the deals between the brokers and broadcasting companies, Kim’s documentary also shows how small and midsize production companies that produce food shows for the three major broadcasting stations - MBC, KBS and SBS - hire fake customers to give their food shows legitimacy. The “customers” rehearse lines and learn exaggerated gestures before going on the shows.

During the production period, several members of Kim’s staff were hired as fake customers for one show after another.

Although the film is about a serious topic, Kim keeps things light with a series of humorous vignettes that keep audiences entertained.

According to Kim, 177 restaurants were featured as “famous” dining places by the three broadcasting stations as of the third week of March last year. Another report by Statistics Korea said that on average last year, 515 restaurants opened and 474 closed per day, which he believes makes restaurants more desperate for TV appearances.

The Korea JoongAng Daily sat down with Kim, who has opened a new chapter in Korean documentary film, to discuss the film and the path he has chosen as a filmmaker. 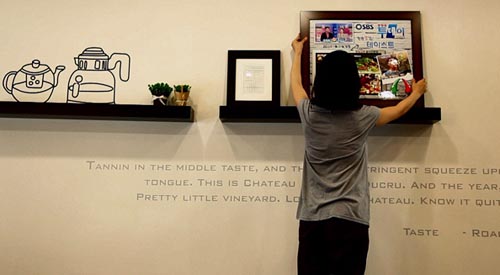 A scene from “The True Taste Show.” In order to shoot the documentary, Kim opened a restaurant in Ilsan, Gyeonggi, and installed hidden cameras to capture his deals with brokers.


Q. Why do you think people are so enthusiastic about your documentary? Although the film opened at 10 theaters, that figure doubled after just a few weeks. Do you think it’s because you’re one of the few filmmakers in Korea willing to take on the broadcasting stations?

A. I think most people have a lack of trust in the way the media presents restaurants because all the shows are pretty much the same. Even people who haven’t seen the film but have just read about it have become upset about broadcasters and the way they profit from featuring restaurants on their shows.

In addition to that, most documentaries are filmed from the third person point of view. But I was different. I was able to deceive the broadcasters and those involved in the same way the broadcasting stations often do.

MBC filed a court injunction against you for the documentary last month but the court dismissed it. Have the other broadcasting stations filed lawsuits against you?

No. But the other broadcasting stations will probably harass me with minor issues in the near future - and they can hire the best lawyers because they are rich. KBS and SBS were directly involved (in taking money from restaurants) but they’ve never apologized for it.

The broadcasting stations always criticize others, but they themselves have never really been attacked. But now they’re going out of their minds because they’ve been attacked. They can’t see why the public is raving about the documentary.

Is it right to feature a restaurant on TV in exchange for money? Before this film leaves the theaters and everyone forgets about it, I’ll urge the broadcasting stations to apologize for what they’ve done and try to get them to offer appropriate fees to production companies.

(Reporter’s note: It has become common practice for broadcasting stations to pay production companies small fees that are out of proportion to the work done. In order to make up for the loss, the production companies say they have had to seek money elsewhere, in this case from restaurant owners. The money is then paid to brokers and broadcasting stations as “sponsorship fees.” There are no relevant laws to regulate these types of deals.)

On the surface, the film talks about Korean restaurants, but it actually deals with the double standards held by the media. Did you consider a subject other than restaurants to deliver your message?

I wanted to talk about the media in a fun and lighthearted way. And food was the best option because it shows the essence of the commercialization of the media. Plus, everyone is interested in food. And I wanted to show what happens when the media betrays its true nature.

It took about nearly three years for you to make the documentary, meaning you probably met more people and did more research than what you were able to show in the film. How did you decide what to keep and what to cut during the editing process?

It was difficult. I once considered including so-called power bloggers (famous bloggers, some of whom get paid to advertise products or services on their blogs) and cable TV networks. When trying to be featured on a TV show, restaurants can pay for several different packages. One package includes a TV appearance and two blog posts.

But I decided to go for simplicity. I focused on the broadcasting stations because they are the biggest predators in the food chain. If they can change, I believe that everything else will get back on track.

While making this film, I met many victims of these food shows. For example, restaurants near the restaurant that becomes famous on a TV show start to see their customer base decline.

In one instance, a restaurant owner who was featured on a TV show decided to open several franchises and started making contracts with potential franchise owners. But after collecting franchise fees from hundreds and thousands of people, the owner bolted and people were left with no recourse.

Your restaurant became popular after your pork cutlet with fiery peppers was featured on two TV shows. Why didn’t you show people swarming to the restaurant after the shows aired?

Because we closed the restaurant before the show hit the airwaves. But we still receive inquires from people who want to visit.

In many other interviews, you’ve mentioned that you are planning to make two other documentaries about the media. How is that going?

I’ve already shot some footage for my next project. It’s about people who the media labels as “experts.” For example, there are a huge number of doctors who pay brokers and broadcasting stations to get featured on TV shows and promote their clinics. Each of these programs charges their own price depending on the time slot. But are these people really experts? Some probably deserve to be called experts, but the thing is that many unqualified people are being held up as experts by the media. And once the media introduces them as such, they start making money. It’s the beginning of a tragedy. This is another way the media gives us false examples of success.

I once told a newspaper about the project and since then, it’s been hard to find doctors who are willing to participate. Personally, I don’t want to finish the project if I can’t find doctors to interview.

Did your family and friends try to stop you from making “The True Taste Show”?

Of course, they didn’t like my idea. So I had to think a long time about whether I should make it or not. But once I decided to go ahead, I never looked back.

With this film, I want to bring about change in the broadcasting companies. What I don’t want to see are temporary changes in a couple of food shows, the disappearance of fake customers and broadcasters shifting their responsibilities to production companies. Then everything will be the same. But I still believe that change is possible.

You seem like a type of person who can’t stand to see unfair practices or injustice. Are you?

(On the day of the interview, which was conducted in Yeouido Park, Kim advised a couple riding their bikes on the walking path to move to a bicycle lane for the safety of other passers-by.)

Your work is similar to that of American filmmaker Michael Moore. Do you have any tips for filmmakers who want to be like him?

When choosing your subject, think carefully about whether it’s an issue you are passionate about. Because it’s a tough world out there.