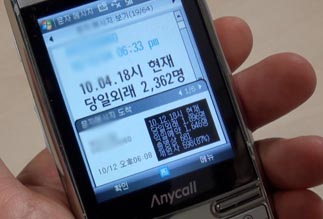 Above is a scene from “White Jungle,” a documentary that reveals the dark side behind the commercialization of the nation’s medical system. Doctors often receive text messages reminding them how many patients have made appointments with them. Provided by the Association of Korean Independent Film and Video

Korean filmmakers have explored many genres in recent years, but the explosive documentary hasn’t been among them.

That job has gone to outsiders. In May, producer-turned-filmmaker Kim Jae-hwan created a sensation with “The True Taste Show,” which revealed the cozy, back-scratching connections between trendy restaurants and food shows on television.

Now comes “White Jungle,” a documentary about Korean doctors and medicine that is already being compared to provocateur Michael Moore’s 2007 documentary on the U.S. health care system, “Sicko.”

The 88-minute “White Jungle” is the first film directed by Song Yun-hee, whose day job is as a medical doctor.

“I try to capture what’s happening to many patients in hospitals these days,” Song said.

Song’s message in “White Jungle” is simple and strong: the Korean government shouldn’t support privatization of medical care. If so, clinics and hospitals will put priority on profits rather than patients.

In order to back up her claim, Song uses many case histories and interviews with nurses and fellow doctors who confess they are often pressured by hospitals to increase profits.

To boost profits, doctors in the film say they are often told to recommend robot surgeries, which can cost up to 10 times more than ordinary surgeries. According to Song, surgeries for life-threatening conditions are far less lucrative for hospitals because they are mostly paid for by national health insurance. That’s the reason a small number of hospitals have facilities for such care for patients like Seok Hae-kyun, the heroic captain of the Samho Jewelry who was shot during the rescue of his ship from Somali pirates and flown home to Korea for treatment. After Seok’s case hit the headlines, the national press bemoaned the shortage of such medical facilities.

“There are a bunch of documents and research papers on why medical care shouldn’t be privatized but they’re not accessible to the general public,” Song said. “I thought I should make a motion picture that anyone can easily watch and then understand the current medical system and its problems in Korea.”

Song and her husband, who is also a doctor, have seen many patients whose lives were destroyed because of medical bills. It made her pick up a video camera.

Song persuaded nurses and fellow doctors against the privatization of medical care to go on camera.

“Of course I felt burdened during the production because I was talking about a certain profession and I didn’t want it to be labeled [as dishonest],” said Song. “Some say I’m exaggerating but I’m not saying that all doctors and clinics are obsessed with making money.”

As with many indie films, “White Jungle” couldn’t afford an expensive release in theaters. Instead, the documentary is making the rounds through community screenings, where a group of more than 20 people ask to view the film.

The 33-year-old director is in talks with distribution companies to release the film at theaters so more people can see it.

When asked about the rise of revealing documentaries in Korea, Song said, “It seems like people are reaching a consensus on documentaries, as they see them as something necessary in our lives.

“In Korea, people like me and director Kim Jae-hwan think there should be someone who can talk about the dark side of our own communities amid corruption.”

“After all, revelation is very powerful key content,” said culture critic Jeong Deok-hyun. “When such documentaries and TV shows aren’t biased, they are necessary in modern society.”

Suh Yi-jong, a sociology professor at Seoul National University, said, “Korea is still in the middle of the democratization period and people believe revelation is equal to justice and fighting corruption.”