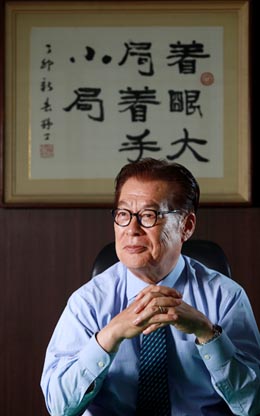 There are some people who can track their life through headlines in the business section of the newspaper. Kim Jay-woo, the chairman of both the Korea Coach Association and the Board for the Foundation for Broadcast Culture, is one of them. Kim, 67, began his ascent in Samsung Group in the early 1970s. He made his mark in Korean industry at age 32, when he single-handedly signed a $101 million export deal with Saudi Arabia at a time when Korea’s total annual exports remained at $4 billion.

After leaving Samsung, Kim became known for his forward-thinking leadership as the CEO of builder Byucksan E&C, where he directed a remarkable turnaround just one year after the company entered a loan workout process in 1998 during the Asian financial crisis. Among many hats Kim could have worn after stepping back from the front lines of industry, he made the choice to lead the still-growing KCA with 300 paying members as of last year.

The public might think of sports when they hear the word “coaching,” but here it refers to a profession first established in the United States during the 1990s that helps clients perform better in personal or professional capacities. Kim sat down with the Korea JoongAng Daily to talk about what makes coaching an effective human resource development method, and how elements of coaching informed his own achievements.


Q. How would you explain what coaching is to our readers?

A. Korea is not only noted for its fast recovery from the global financial crisis, but it’s known for its strength in industries such as IT and automobiles. But that’s a story of the past. We live in a knowledge-based economy. This means one of the traditional factors of economic production - labor - has been replaced to an extent by knowledge. And one of the key differences between labor and knowledge is that the utilization of labor can be maximized by giving people orders, but knowledge - and the creation of knowledge - can’t be ordered about.

In the past, we were good followers. We followed GE, Sony and Toyota. But it is getting harder and harder to find someone to follow as we reach higher levels of performance. In the past, all you needed was a smart leader who said “follow me.” But creation is molded by taking one’s own sensibilities and creativity.

This is where coaching as a profession and as a discipline comes in. Coaching believes that there is a sleeping giant in all of us. If teaching means outside-in instructions, coaching is an inside-out process of realizing the potential that’s already inside a person. As Galileo said, “We cannot teach people anything, we can only help them understand.” So bringing out that momentum inside a person to learn and create one’s own path is what coaching is about.

How can coaching inspire personal growth?

A person, when asked a question, is compelled to think about their answer. This is the power of a question, given the questioner and answerer are standing on equal footing amid respect. So when a coach and a coachee are engaged in conversation, the coach mostly listens, and asks well-formed questions that are open, positive and future-focused. For example, let’s say a mother is asking her grade school son about his day. She could ask, “Did you listen to your teacher today?” or “What was the most fun thing you did today?” Between the two questions, the first provokes a yes-or-no answer; the second provokes thought and produces an answer that is unique to that person.

Why do people need coaching? You might be (golf champion) Roy McIlroy at the top of your game at age 22 or down and out in your 50s, but to paraphrase a quote attributed to Julius Caesar, we humans can easily become preoccupied with what’s in front of us. We find it easy to be distracted from our long-term goals by the vicissitudes of life. Coaching helps a person choose their direction and keep on that path by bringing goals and desires into clear focus through questions.

I was at Samsung for 29 years, and when I meet my former colleagues and subordinates, they tell me that even then I asked a lot of questions. (The 1970s and 1980s) was the peak of “follow me” leadership in Korea, but people who worked under me recall being vexed by having to answer questions like “What is the most important issue for you this week?” All of their colleagues had bosses who issued direct orders. At the time, independent thinking was not the main trend.

The qualities of a coach were already latent in me. To give it a positive spin, I think I already had that respect for the other person and the belief that in order for a person to perform well, self-realization is necessary.

How did you find it in yourself to achieve what you have in the past?

When someone says something is impossible, they often don’t actually mean impossible - they mean seemingly impossible. They say man thinks of some 60,000 things in a day, but only 5 percent of that is different between yesterday and today. To me, immersion means not only using that 5 percent, but using 10 times that capacity. And because I personally experienced such an immersion in my early 30s, I have greater trust in the fact that you can achieve the seemingly impossible if you immerse yourself.

What is your goal for KCA and the field of coaching?

I put forth a vision of a KCA that “raises the Korean public’s happiness index” when I became its chairman in January 2010. We know that economic abundance does not necessarily equal happiness. Until now we’ve been jostling to overtake one another while running on the same road. But if individuals know their own path, and can be helped to feel good about their achievement, this will cause people to feel content apart from their economic standing. To do this, our goal is to increase the number of KCA members to 5,000 by 2015.