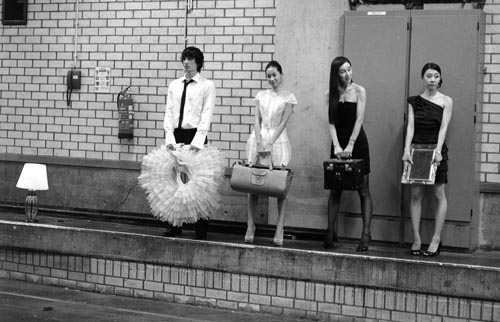 July 24: Presented by Arumdaun Orchestra, this educational concert for young audiences features the music of legendary composer Ludwig van Beethoven. The program features many works that are introduced in school textbooks, including Overture to “Coriolan” in C Minor, Op. 62; Romance for Violin and Orchestra No. 2 in F, Op. 50; and Symphony No. 7 in A, Op. 92.

Saturday: The Korea National Ballet is practically giving away tickets for this performance, which features highlights from “Giselle” and Spanish classic “Don Quixote,” in a lottery on its Web site.

July 23 to Sept. 11: This show by Tony-award winner Joe DiPietro is a quirky take on the story of creation. It explores the romance between Adam and Eve and attempts to show how paradise can exist only with the presence of love.

Kim Hong-do, also known as Danwon (Kim’s pen name), is renowned as the first late Joseon Dynasty painter to extensively and realistically portray scenes of the daily lives of the common people. His paintings, such as “Mudong” (“Dancing Boy”) and “Ssireum” (“Korean Wrestling”) are known throughout Korea.

To July 23: This festival celebrates gugak (traditional Korean music) with performances by some of Korea’s finest traditional groups.

Japanese-Korean composer Yang Bang Ean presents his impressions of Jeju in concerts on Saturday at 3 and 7 p.m. Multi-instrumentalist Baramgot performs on July 14 at 7:30 p.m., GongMyoung uses 30 bamboo instruments in his concert on July 16 at 7:30 p.m. and percussion group Dulsori present their energetic mix of music and theater on July 19 at 7:30 p.m.
Tickets are 40,000 won.
Go to Dongguk University Station, line No. 3, exit 2, then take the shuttle in front of Taegeukdang.
(02) 2280-4114, www.ntok.go.kr

July 22 to 23: Get cool this summer at the first music festival in the nation to be held at a water park. The program features world renowned musicians and popular Korean singers.

The Friday headliner is American singer-songwriter and rapper T-Pain, who will perform with a full band. Also on the program are 2PM, UV and AstroVoize.

The Saturday headliner is will.i.am from the Black Eyed Peas, who will do a D.J. set. Also performing are Drunken Tiger, T (Yun Mi-rae) Koonta and D.J. Yup.

The festival is set in the luscious Jisan Valley and offers a great weekend to mix and mingle with people from all over the peninsula as well as to eat, drink and be merry.

Pentaport is also known as something of a showcase for underground Korean bands, too, and this year is no exception. No Brain and Vidulgi OoyoO will be there. The festival site, Incheon Dream Park, is a former landfill and is only 20 miles from downtown Seoul.