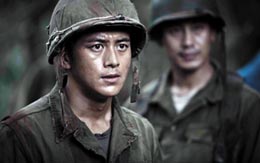 With a large budget of 10 billion won ($9.5 million), “The Front Line” takes place during the height of the Korean War, two years prior to the signing of the armistice. Korea has seen many war movies in the past few years, but “The Front Line” is based on a real story - in fact, a rather curious one.

In February 1951, a South Korean company commander is found killed, not by enemy bullets, but by those of his own army. Suspecting that there may be soldiers “communicating with the North,” the military brass sends Kang Eun-pyo (Shin Ha-Kyun) to investigate the situation.

What Kang finds there, however, is not the answer to the case, but even more questions. The mystery mounts as he finds his long lost friend Kim Su-hyuk (Go Soo), now leading the company in question, and thus at the center of the case.

“The Front Line” is directed by Jang Hoon, well known for his success in producing both “Rough Cut” (2008) and “Secret Reunion” (2010). Although only on his third film is his style for action films becoming increasingly known.

The film weaves the story of how the members of this modern rock band first met, and how they become the band they are now. It is a story of passion, music and dreams, as the three young men venture into the world of music.

A notable aspect of the film is its unique, warm color, what many point out as a style neither like an independent film, nor a big-budget movie.

The members of Mate not only participated in the film by acting their own characters, but also by producing songs for the movie’s original soundtrack. Many say that it is a “rediscovery” of a talented band and a complement to their music.

The director, Nam Da-jeong, is also known to be one of the few female film directors in Korea. She has won awards with her short films “Children of the Old Days” (2007) and has also directed movies such as “Milky Way Liberation Front” (2007) and “Short! Short! Short! 2009: Show Me The Money” (2009).


Harry Potter And The Deathly Hallows: Part 2 (all)

It all ends here. For many, leaving the theater after viewing this final installment of the Harry Potter film series will mark the end of an era - a nostalgia-inducing rolling of the credits that will remind avid fans of the moment they finished that final chapter in “The Sorcerer’s Stone” back in 1999.

A decade later, the magic still awes, and this time viewers will enjoy the spell of 3-D wizardry. While the slower-paced Part I left some disappointed last fall, the epic, action-packed finale will surely satisfy audiences, young or old, muggles or half-bloods.

Director David Yates, who previously helmed “The Goblet of Fire,” “The Half-Blood Prince” and “The Deathly Hallows: Part I,” does his last Potter-related film justice. When riding your Firebolt (or Nimbus 2000, if you’re lucky) to the theater, don’t forget to bring a handkerchief.

Lighting McQueen (Owen Wilson) is a four-time Piston Cup champion race car, but nothing has prepared him for what lies ahead in “Cars 2.”

The intentions are good, what with the cars using the biofuel during races, and McQueen can’t turn away from a good competition. But meanwhile, Professor Zundapp (Thomas Kretschmann) is planning to take over the world’s remaining oil supply and sabotage the races.

Along the way, Mater gets mistaken by some British secret agent cars as their American contact, and things start to spiral out of control.

This is supposed to be animated fun, and while there are jokes and enjoyable scenes, the plot itself sounds a bit too “Quantum of Solace” to be a lively “Cars” film.

In any case, will Mater and McQueen be able to stop Zundapp - or the real mastermind behind his plan - before the damage is done? 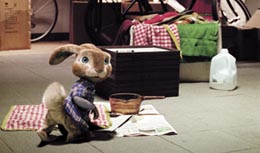 This is a perfectly pleasant film with the occasional laugh, but Hill offers nothing more than an absurd plot. Many with low expectations will still find their experience unsatisfying.

Set during a conflict in the Middle East, Denis Villeneuve’s “Incendies” is based on Wajdi Mouawad’s 2003 play “Scorched” and follows Jeanne and Simon Marwan, twins who discover upon opening their mother’s will that their father, thought to be dead, is actually alive and they have a brother they never knew existed.

Jeanne (Melissa Desormeaux-Poulin) is given the letter that is to be delivered to her father, and Simon (Maxim Gaudette) is to find and deliver the letter to the brother. Both set off on a journey to fulfil their mother’s wishes and unravel the mystery of her life, which seems to have been anything but simple.

Roger Ebert praises the film and highlights how one of the main elements of the film is “how senseless and futile it is to hate others because of their religion,” but in another breath he makes a very good point about the purpose of the letters, which could possibly be identified as Hitchcock’s MacGuffin but could well set the twins up for failure if they were to fail to deliver the letters to their intended recipients. The film was nominated for an Oscar for best foreign language film, has won several other awards and if nothing else promises that Denis Villeneuve’s next film will be widely anticipated.