With rise of 3-D, films with subtitles lose out to dubbing

With rise of 3-D, films with subtitles lose out to dubbing 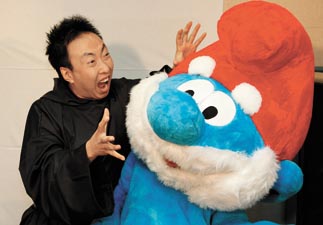 Comedian Park Myung-su lends his voice for Gagamel, a villain in the upcoming live-action film “The Smurfs.” Provided by Sony Pictures

Intrusive, annoying and definitely not helpful for learning English, dubbing foreign movies used to be seen as an unavoidable concession to children who often can’t read subtitles quickly, if at all.

But dubbed films are gaining ground in Korea with the rising number of 3-D animated films - both foreign and domestic - entering the country’s theaters.

“People who are coming to theaters to watch 3-D films prefer dubbed versions,” said Yoon Suk-hee, head of Ega Pictures, which promotes the recent 3-D animated movie “Rio” in Korea. “Three-dimensional films hurt your eyes because objects are constantly popping out. If you have to read subtitles while watching the film, it makes it even harder to watch.”

Aside from relieving strained eyes, Yoon added that dubbed films are more effective in allowing the audience to indulge in the movie, instead of following the text at the bottom of the screen.

Now, more than ever, voice casting is becoming an important way to meet rising demand for dubbed films as well as providing a new promotion device.

“Rio,” the 3-D animated film about a bird named Blu and his journey from the wilds of Rio de Janeiro to Minnesota, features well-known Hollywood actors like Anne Hathaway and Neil Patrick Harris.

With a rising number of 3-D animated films, dubbed versions are beginning to outnumber subtitled versions to relieve eye strain. “Rio,” which will be released later this month, features the voices of two rising stars, Song Joong-ki (bottom right) and Park Bo-young (bottom left), who replace Anne Hathaway and Neil Patrick Harris in the original. Provided by Ega Pictures


But local moviegoers will have a hard time hearing their voices because Rio will be released here later this month with a far higher share of the dubbed version than the subtitled version. Two rising actors, Park Bo-young and Song Joong-ki, will replace the Hollywood pair in the vernacular.

In the past, animated foreign films were released in both subtitled and dubbed versions in a 3-to-2 ratio on average, according to industry experts. But those proportions are changing. Today, a movie’s ratio of subtitled-to-dubbed screens is about 2-to-3, 1-to-4 and even 1-to-9.

The use of celebrities to voice animated characters has also become a marketing tool, especially for lesser known studios, helping to drive the increasing ratio of dubbed screens.

In addition to “Rio,” “Sammy’s Adventure: The Secret Passage,” “Despicable Me” and “Megamind” are some of the other recent animated films that have put a priority on their dubbed versions by hiring Korean celebrities.

“We are looking for people who have suitable voices for our characters. But stars who have recognition are better than professional voice actors when we promote the film,” said Han Seung-hoon, an official at Meditation with Pencil, an animation studio that produced the local animated feature film “Green Days: Dinosaur and I.” “The stars have fan bases of their own, and it helps in some ways [in promoting the film].”

“Green Days: Dinosaur and I” is a 2-D movie, but it hired two actors, Song Chang-eui and Park Shin-hye, to voice the lead characters. 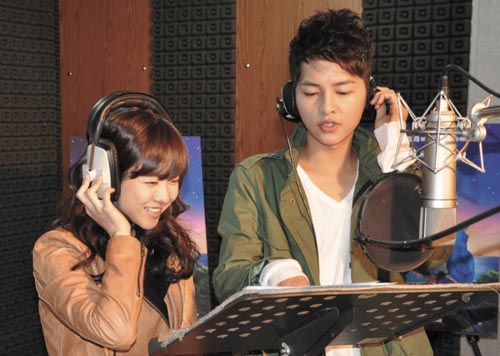 In particular, members of well-known K-pop groups often land roles in animated films, given their large number of followers.

“Sammy’s Adventure: The Secret Passage” hired Daesung from the boy band Big Bang and Sulli from the girl band f(x). “Despicable Me” succeeded in stealing the spotlight even before its release last September by casting Tae-yeon and Seo-hyun, two members of Girls’ Generation. The two animated films attracted 1 million and 980,000 moviegoers, respectively, nationwide.

Lee Joon from MBLAQ and Ji-yeon from T-ara teamed up to lend their voices in “Gnomeo and Juliet,” and Gyu-lee from KARA and Shin-dong from Super Junior dubbed “Alpha and Omega” earlier this year.

Film distributors in Korea have also turned to comedians. Most recently, comedian Park Myung-su lent his voice to Gagamel, a villain in “The Smurfs,” which will be released next month.

But not everyone is happy with the recent explosion in dubbed movies, even among some 3-D film fans.

“Most of these K-pop stars or comedians are not skillful voice actors,” said Lee Eun-jung, 31, who loves to watch animated films. “Sometimes it’s even hard to understand what they are saying because of their poor diction.”

The increasing trend in dubbed films doesn’t sit well with Lee: “I hope to watch 3-D films with subtitles, but it’s getting hard to find subtitle versions these days.”