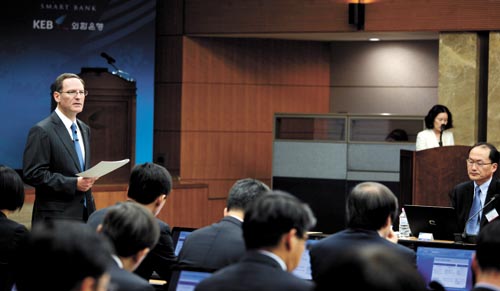 The NPL coverage ratio is 125.4 percent as of the end of the first quarter, which is the highest level among the six commercial banks. This shows that the bank has sufficient allowances for bad debts and preparation for bad loans and loss. Since the accumulation of allowance for bad debt is directly related to the net profit, it shows how conservatively Korea Exchange Bank is accumulating the allowance. This fits Korea Exchange Bank’s management mantra which is ‘Not the largest, but the best bank.’

Korea Exchange Bank is continuously maintaining a stable business performance based on key competitiveness aspects, which are credit risk management, financial soundness improvement and foreign exchange. The regular profit income has increased especially during this 2nd quarter. Korea Exchange Bank is also maintaining the optimal capital rate, despite the dispute of high ratio dividend. Despite this dispute among the high ratio of dividend payments, Korea Exchange Bank is expected to achieve the highest record of net profit during the 2nd quarter, so the financial soundness and optimal capital rate is expected to be maintained at a good level.

BIS, which is the main index for financial soundness, shows little change since the 1st quarter, at 14 percent, and in the case of Tier 1, it is expected to increase compared to the 1st quarter.

The stock price, which is the index used to estimate the current and future value of the bank’s stock price still maintains the level before the dividend payouts, which proves that the market is not worried about Korea Exchange Bank’s financial soundness and optimal capital rate.

KEB is now speeding toward normalizing business and operations strengthening its business force. The slowed down business to Korea Exchange Bank, since Lone Star announced the selling of Korea Exchange Bank to Hana Financial Group, has started to reorganize since the Senior Management Meeting (SMM) held by Larry Klane, the CEO of the Bank, on May 26. The executives have become one in mind and plan to normalize the bank’s business and strengthen its operation ability. At SMM, the executives, department heads and major directors gathered together and brain stormed ways to improve the organization that was affected. They also thoroughly discussed how to normalize the business and reinforce internal control procedures.

Posters at branches opposing the bank sale were replaced with new posters advertising the bank’s new products. Larry Klane the CEO of the Bank requested unification and cooperation of the entire workforce and advised in detail how to strengthen the business so as to strengthen the customer base and focus more on marketing activities during the SMM.