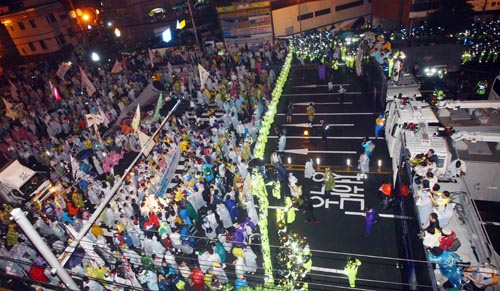 Thousand of citizens, politicians and religious leaders at a “Buses for Hope” rally Saturday occupy an eight-lane artery leading to a Hanjin Heavy Industries & Construction Co. shipyard on Yeong Island, Busan. Their progress was blocked by barricades and policemen. [NEWSIS]


The labor strife at Busan-based shipbuilder Hanjin Heavy Industries & Construction Co. is becoming a national cause celebre, as ordinary citizens and politicians flock to large demonstrations and demand the company go beyond a settlement reached with its union last month.

Last weekend, nearly 7,000 citizens, politicians and civic-group activists rode in 185 buses, which they dubbed “Buses for Hope,” to join a second large rally on Yeong Island off Busan. The rallies took place outside Hanjin’s shipyard on Yeong Island, which was barricaded by police.

Participants, many summoned by posts on social networking sites such as Twitter and Facebook, paid 30,000 won ($28) to ride the Buses for Hope.

Democratic Party Chairman Sohn Hak-kyu visited the factory yesterday to urge the management to compromise more and to ask policemen not to repress workers or protestors.

“The labor issue at Hanjin Heavy Industries and Construction has attracted people who are anxious about the current employment situation in Korea,” said Kim Yu-seon, chief of the think tank Korea Labour and Society Institute.

Roughly 1,100 Hanjin union members went on strike on Dec. 20 last year, five days after the company announced that 400 assembly-line workers would be laid off. In January, 110 of the 400 voluntarily quit, and 290 workers were fired. The company shut down the Yeong Island shipyard and two other plants in February, but striking workers occupied them.

The 190-day strike ended June 27 when the union signed an agreement with management and returned to work. The company agreed to give severance pay to all laid off workers. The shipyard is now operating and now 1,400 of the company’s workers are back to work.

But four fired workers and Kim Jin-suk, an official of Korean Confederation of Trade Unions, weren’t satisfied with the agreement and didn’t leave the shipyard. They are now rallying inside and Kim has been protesting from atop a crane for 188 days despite an expulsion order from a Busan court. The rallies have been called to support Kim and the four fired workers.

Civic activists and other labor unions nationwide decided to stage rallies on the island and invited citizens nationwide to join. They brought about 500 people for the first bus rally from June 11-12. Kim Yoh-jin, an actress, was arrested on charges of violence and attempting to enter the factory, drawing public attention to the issue. She was released the same day.

At a second rally held last weekend, thousands of people - mothers, temporary workers, white collar officials and even social minorities such as lesbians - descended on the island not merely to support the laid off workers but also to speak out about their own poor working conditions.

Park Jeong-hui, a 27-year-old worker, said in an interview with Hankyoreh, “I think this issue is not just for workers in Hanjin, but for all of us who are weak and could be fired anytime.”

Mun Ae-rin, a 31-year-old woman suffering from cerebral palsy, said, “Although the strike at Hanjin is not relevant to me, working conditions for people with disabilities is worse than for normal workers. In this sense, their problem is my problem.”

Gweon Gi-hong, a 23-year old university student, said, “Unless the country’s working conditions aren’t improved, the suffering of Hanjin workers could be ours after graduation.”

The least sympathetic Koreans are residents of the island off Busan.

“I have been washing away the stink [left by demonstrators] all day, but the smell never disappears,” said Kim Seong-ho, a 45-year-old resident of Yeong Island.

Eo Yoon-tae, head of the Yeongdo District in Busan, said at a press conference Wednesday that he couldn’t stand the rallies that have descended on the city.

“When the second Buses for Hope rally was held over the weekend, traffic was paralyzed and residents are tired of cleaning up the mess,” Eo said. “I don’t want the buses to come [to Yeongdo District] anymore.”

Je Jong-mo, a Busan city council member, said, “The buses are not for hope, but for desperation. It’s not right for any third party to be involved in an agreement made between management and labor union members.”

According to the district office, about 7,000 demonstrators threw away 30 tons of trash near the factory, including 100 placards and 1,000 bricks, which were to climb the police’s barricades.

About 500 current workers staged a rally Wednesday at the front gate of the shipyard, calling the demonstration “inappropriate interference of a third party”.

Despite opposition from the company and local residents, a third bus demonstration will be held July 30. Roughly 30,000 people will attend, according to organizers.