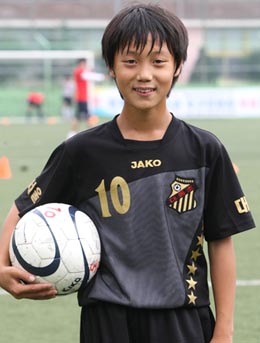 Baek Seung-ho, 14, who joined the Spanish club 16 months ago, made an agreement with the team to extend his stay at its youth academy, said his father Paik Il-yeong, a physical education professor at Yonsei University.

Barcelona is known as an incubator of talent, promoting a succession of graduates to its first team. Seven players who started for Barcelona in its UEFA Champions League final win in May came through the club’s youth ranks.

“At the youth level, a one-year contract is standard,” said Jeong, who played for Barcelona’s under-16 squad. “The five-year contract shows that Barcelona has plans to develop Baek into a player for its first team.”

Baek started playing football at age six and began receiving national attention in fourth grade as Daedong Elementary School’s starting forward. In 2009, pundits started calling him a prodigy. In a weekend league, Baek - then in sixth grade - scored 30 goals in 18 games to become the league’s top scorer. He scored 10 goals in six matches and was named MVP in the Gyeongju Hwaranggi youth competition.

Baek caught Barcelona’s eye that December when he starred in an under-14 tournament between Korea and Cataluna.

At the youth academy, famous for graduating diminutive players, such as Andres Iniesta, Lionel Messi and Xavi Hernandez, the 5-foot-2 Baek has shone while donning the symbolic number 10 jersey for the under-13 side.

As he returned to Korea on Saturday for a break, Baek expressed his hope to be compared with Barcelona’s most famous youth product.

“I will work hard so I can be known as the ‘Korean Messi’ in Barcelona,” he said.