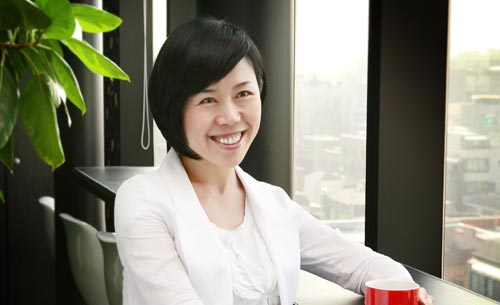 
Within the past century, the average global temperature has risen by 0.74 degrees Celsius (1.3 degrees Fahrenheit), while the temperatures in Korea and Seoul have jumped by 1.5 and 2.4 degrees Celsius, respectively. The changing climate is of great concern to many people around the world, but the reality is that not many actually take steps to address these problems.

But Ha Ji-won, chief executive of Ecomom Korea, is different. She believes that even one small action can make a big difference and that one person can initiate eco-friendly movements. That’s why she established her own environmental group, Ecomom Korea, which raises awareness among citizens, and mothers in particular, about environmental issues.

Ha became an environmentalist after she won a seat on the Seoul Metropolitan Council in 2006. During her four-year term, she served in the environmental department.

She established Ecomom Korea at the beginning of last year.

“While I was working for the government, I felt the need to raise awareness about environmental issues,” Ha said. “Korean mothers have a great interest in the environment for various reasons, but there wasn’t a single environmental organization to show them how they could help.”

The group gets people involved through environmental campaigns, but also emphasizes the importance of incorporating eco-friendly practices into daily life.

Recently, the group adopted a new strategy called buzz marketing, which relies on word-of-mouth. The group has several writers who post articles about environmental issues online to create a buzz, especially among mothers.

“One small action can initiate an eco-friendly movement,” Ha said, noting that Ecomom’s campaigns are practical.

Through its Mug Campaign, which began in April, the group encourages people to use of mugs instead of disposable paper cups. When people take a picture of themselves using mugs and upload it to the Ecomom Web site, Ecomom Korea rewards them with gifts.

“The employees who participated in the campaign started using scratch paper and the company cafeteria reported having much less food leftover,” Ha said.

Ecomom’s next project will be to launch a volunteer program for parents and children.

“My goal is to continue having campaigns until environmental preservation becomes a social trend,” she said.