Saying thanks to long-ago volunteer

Saying thanks to long-ago volunteer 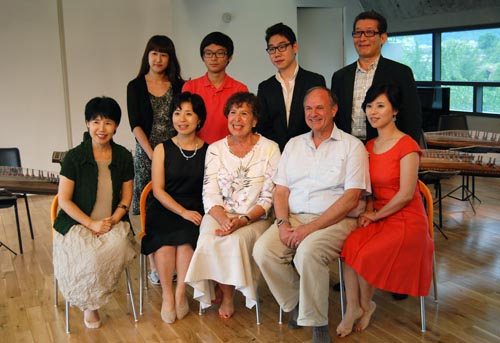 Frank Axel and his wife pose with the members of the Song family that he had stayed with as a Peace Corps volunteer in Korea in the 1960s after a concert the two sisters of the family hosted for him in Insa-dong, Seoul, Thursday. Left and second left in the front row are the sisters Song Hye-jin and Song Hee-young, respectively. By Moon Gwang-lip


Frank Axel cherishes the time he spent in Korea as a Peace Corps volunteer in the late 1960s, the memories of which he keeps with the help of photos he took.

But, the old Korean song “A man in the yellow shirt” that he heard on a radio in a bus or while drinking makgeolli in a bar had slipped his mind until the performance by a musical troupe in Insa-dong, Seoul, Thursday reminded him of it.

“It is so recuperating,” said Axel, 66, of the songs played by the troupe after the concert ended.

Axel, CEO of a chemical company in New York, and 25 other former Peace Corps members attended the concert during a week-long return trip to Korea at the invitation of the Korean government, a biannual event Korea hosts to express its gratitude for the services of the Peace Corps members. Fifteen family members, including Axel’s wife, accompanied them.

The concert, however, was not initially on their itinerary.

Two sisters of a Korean family that Axel had stayed with during his two years of volunteering in Korea suggested to the Korea Foundation, the host of the event, that they hold the concert for the visiting Peace Corps members, and in particular for Axel.

Older sister Song Hye-jin, a music professor at Sookmyung Women’s University, sought cooperation from her students, and the younger sister, Song Hee-young, an art professor at Seoul Institute of the Arts, directed it.

A year after graduating from the University of Wisconsin, Axel, who was 23 at the time, joined the Peace Corps, a U.S. federal agency, and was assigned as a public health worker from 1967 to 1969 in Daedeok, South Chungcheong.

It was a small village of 600 people at the time, and he was the first foreigner that many of the locals had ever seen. Axel was considered kind and the residents warmly welcomed him, the Songs said.

Axel received a thank-you plaque from the principal of an elementary school in the village for helping dig a well that provided clean water. Axel said he still keeps it in a frame at home.

The two Song sisters, 8 and 6 when meeting Axel for the first time, said they especially liked him, saying he opened their eyes to the world outside and taught them how life could be exciting and rich with friendship. The friendship lasted even after the girls’ parents died, with Axel sending postcards to the family regularly and the sisters sending back letters.

Song Hee-young said Axel inspired them to find talents they had thought they didn’t have and in return they have wanted to do something special to express their affection for him, whom they still call “Ajossi” (uncle).

“The first English word that I learned is uncle,” said Song. “It is very special to have someone other than family that watches the entire time you grow up with affection and encouragement. It’s so heartwarming.”

Axel said the connection with them is special to him, too. In gratitude, he gave about 300 photos of the Song family, the village and its people that he had taken, to the Song family this week.

“I have always been considered part of the family, even today,” he said.

Axel said he came to Korea following the objectives of John F. Kennedy, the initiator of the Peace Corps, to spread American values, but he himself received much from Korea.

“My experiences in Korea left a lifelong mark,” he said. “It was a very impressive, impressionable time that has been strong in my memory and my personality.”

The Peace Corps, celebrating its 50th anniversary this year, has dispatched more than 200,000 volunteers to 139 countries.

Around 2,000 Peace Corps members volunteered in Korea beginning in 1966, teaching English and providing medical services and vocational training to Koreans.

The Korean program ended in 1981, when the country started to prosper.

Axel said it is good to see Korea now sending its own aid workers to foreign countries. And inviting Peace Corps members to Korea is also good, he said. Initiated in 2008, the program has brought back about 290 former Peace Corps members and their families.

“It is an extraordinary opportunity to reconnect,” Axel said.