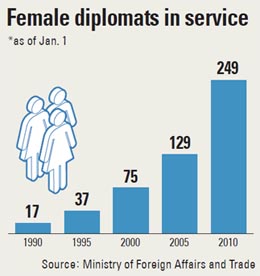 Like many working Korean moms, Jeong Ji-ye, a diplomat working abroad, awaits precious Saturday family time, of which she has too early, too little and too remotely.

Her husband in Korea calls her at around 8 a.m. every Saturday as he has done for the past three years, and her two daughters - now 8 and 6 - often fight over the phone to listen “daddy’s” voice.

Her term overseas is expected to end in months, and she says she will then be able to feel less sorry for her husband and daughters, at least until she receives her next overseas assignment.

“I am happy my children do not question why they don’t have daddy at their side while other children do,” said Jeong, 40, speaking by telephone and e-mail.

“Being a female diplomat, it’s tougher than I imagined in the sixth grade, when I began dreaming about becoming a diplomat.”

With the number of women passing the country’s High Diplomatic Service Examination having rapidly increased over the past decade to more than 50 percent of the seats in recent years, about one-third of the officials at the Ministry of Foreign Affairs and Trade are now women. Among the 2,070 employees at the ministry, 607 employees, including low-level administrative officials are women, the ministry said.

Still, female diplomats at overseas posts tend to live their lives more as loners than their male counterparts, and their lives abroad have been given little attention.

Jeong, an alias, requested to remain anonymous, citing the disadvantage she might face from openly talking about her life as a diplomat, as did several other female diplomats interviewed for the article.

Many of them said managing a family is an ordeal during overseas duty because of the inevitable separation of family.

Jeong, a 16-year veteran, left Seoul on a three-year assignment in 2008, but usually, and almost certainly for entry-level diplomats, overseas assignments are for five years - three years in an advanced country and two more years in a developing country. And that, in most cases, means separation for just as many years from their spouses or children.

These separations are a mostly a problem for women diplomats, not for their male counterparts, they said.

That stark contrast partly stems from Koreans’ deeply entrenched Confucian concept of male priority, which generally condemns men who have a less impressive, lower-paying career than their spouses.

That situation results in many spouses of Korean female diplomats opting to keep their careers in Korea rather than following their wives to overseas posts.

To compensate for financial losses from spouses abandoning jobs, the Foreign Ministry provides a salary to spouses accompanying diplomats to overseas posts, but it is only equivalent to 25 percent of a diplomat’s salary. Even if money is sufficient, most men would not trade the money to leave after working in their fields for many years, some female diplomats said.

“I can bear the absence of my husband, but growing up without seeing their father could have a negative impact on the mental health of the children,” said a female diplomat with two children. “If it is one time, it might not be a big deal, but with all the overseas assignments combined, the period could be extended to many years.”

Personnel managers at the ministry said that, nonetheless, it is a problem they have to endure once they decide to be a diplomat. Or, as one manager said, the husbands should just go along.

“I think it’s absurd that male spouses don’t follow when female spouses are willing to follow,” the manager said.

“They should go and we are encouraging them to go.”

Female diplomats say one small solution is to find spouses who have more flexibility with their jobs.

Female diplomats’ spouses are predominantly teachers, lawyers, doctors, public officials or journalists, who tend to take longer vacations than ordinary office workers or can work outside the office, said Kim, the personnel manager at the Foreign Ministry.

Female diplomats say they prefer spouses in those professions because they tend to better understand the inevitability of working overseas and there is less tension in their relationships.

“Female diplomats are so straightforward about what types of spouses they want,” said an official at Duo, the country’s largest matchmaking service provider, which said it has several female diplomats as clients.

“They want someone who speaks English, someone who can adjust to life overseas, but above all, they want to marry someone in special vocations so they can understand their irregular working conditions.”

Some female diplomats take the idea further and marry fellow diplomats, although that can mean longer separation when their overseas postings are not simultaneous, said Kim Eun-young, a director at the ministry’s Southwest Asia and Pacific division.

Kim and her husband, Lee Byeong-do, are one of the 24 “double diplomat” couples at the Foreign Ministry.

“I heard from fellow female diplomats that the desire to reduce friction in marriage is taken into consideration when they choose male diplomats as spouses,” Kim said.

Such marriages may reduce the pain, but some female diplomats who have been living as single parents for long periods of time - more than 10 years for one female diplomat - are tired of the difficult living conditions and are considering calling it quits, according to Oh Young-joo, a 47-year-old ministry official.

“Among younger female diplomats, some, faced with the problem of family separation, have begun to question whether they should continue to hold this job,” she said.

Abandoning the career, once unthinkable in such an elite diplomatic world, could be more likely, ironically, with Korea’s increased international status, diplomats said.

“For diplomats, the G-20 means that there are now only 20 countries that have at least as good working conditions as Korea,” one female diplomat said.

“Working in countries where you are exposed to more danger - from a lack of security or prevalence of disease - than Korea, sitting up many nights to deal with mountains of work and having no family to spend time with is now the reality, not a risk you can avoid,” she added.

Oh, with a 23-year career as a diplomat, said that when she entered the Foreign Ministry, women were a real minority.

She said there were only a handful of female diplomats among her seniors, so they did not think of demanding considerations for women.

But given the ever-increasing presence of women at the ministry, it may be the time to consider changes for female diplomats.

One thing that should be considered, she said, is allowing female diplomats to deal with foreign affairs without having to go overseas.

Diplomats not going overseas sounds like an oxymoron, but Oh said there are a growing number of female diplomats who want to stay in Korea and manage family affairs without interruption.

There is demand at the ministry for such work, in particular, analyzing international treaties, she said.

Some female diplomats said flexibility is needed in the management of overseas assignments, so they can return home easily for family emergencies.

Personnel managers at the Foreign Ministry, however, were not in favor of changing personnel policies, citing a sensitive reaction by male diplomats.

One senior male diplomat complained that female junior diplomats seem more interested in their personal welfare than work and that it is difficult to work with them because of it.

“[Male officials] have taken for granted sacrificing our time for the work and the nation,” he said.

“You never know whether [female officials] will now only demand easy assignments at good posts,” he said.