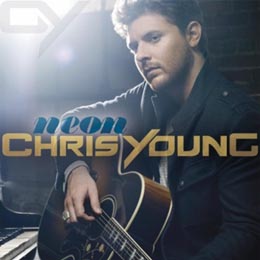 Since Chris Young won the TV talent show “Nashville Star” in 2006, a few characteristics have stood out: an expressive baritone voice; a tall, handsome stature; and a friendly, approachable personality. And with four consecutive No. 1 hits, including the recent “Tomorrow” from his new album “Neon,” the emerging country star is staking out a distinctive style that takes full advantage of his talent and his personality.

At his core, Young is a romantic with a moral code. The Tennessee native has a sensitive way of bringing out what’s important about what he cares about and who he is. This style shows not only in love ballads, but also in songs about family and his laid-back yet caring philosophy on life. But what makes “Neon” his best album yet are the songs about relationships, from the sweet come-on of “Lost” to the sage “Old Love Feels New.” Throughout, Young comes across as a guy whose heart is as strong as his libido.