[New Releases] “Transformers: Dark of the Moon - The Album”

[New Releases] “Transformers: Dark of the Moon - The Album” 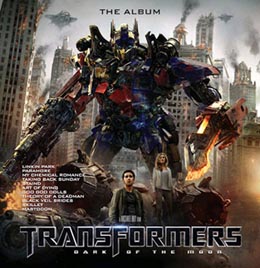 Linkin Park again provides the theme song for the “Transformers” sequel, after the band’s successful collaboration with director Michael Bay on the first two movies.

“Iridescent” is a rock ballad with a hopeful tune and lyrics - “Remember all the sadness and frustration, and let it go.” It’s lighter than the previous two Transformers albums’ lead singles “What I’ve Done” and “New Divide,” which each had more than 3 million paid downloads, and typifies the paucity of speaker-blasting, ear-ringing songs on this all-rock album.

Still, the metallic sounds of Art of Dying (“Get Thru This”), Skillet (“Awake and Alive”) and Staind (“The Bottom”) lend energy to the soundtrack of the action-packed robot film, though none of those bands’ songs are actually used in the film. Viewers of the movie, which has grossed $762 million worldwide, should not expect to hear all of the songs on the album; only four of them are actually featured in the film.

Various “Transformers: Dark of the Moon - The Album”