Expats to help expats in Seoul

Expats to help expats in Seoul 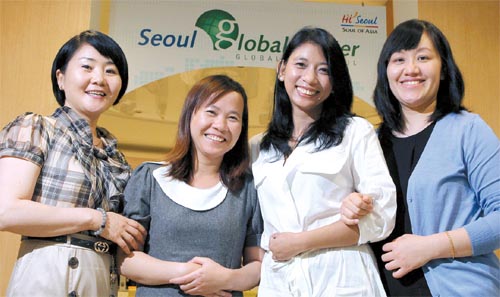 Four marriage immigrants were recently hired by the Seoul Metropolitan Government to oversee immigrant and expatriate issues in the city. From left to right, Chuluuntsetseg from Mongolia, Pham Thi Quynh Hoa from Vietnam, Jasmine Lee from the Philippines, and Jin Hong from China. By Kim Do-hoon


Four women hired by the Seoul Metropolitan Government to help expatriates and immigrants across the city know a thing or two about settling down: they themselves are marriage immigrants.

The women, who started work earlier this month on a five-year contract, are the first immigrant civil servants hired to oversee the city’s immigrant and expatriate community.

“Most immigrants in Seoul, who don’t come from OECD countries, have a tendency to avoid Korean government officials trying to help them,” Chae Myung-joon, from the city’s Foreign Residence Assistance Division, said in interview with the Korea JoongAng Daily on July 5. “And we came up with the idea of employing foreign officials who can act as a ‘bridge’ between us and expatriates, giving them information on life and government services in Seoul.”

Jasmine Lee, 34, originally from the Phillipines, is one of the four new officials. Lee met her Korean husband in 1995 while attending medical school and moved here to raise her family. She is also a regular panelist on the television program “Love In Asia”.

“Most expatriates don’t even know about these kinds of job opportunities from the Seoul government,” Lee said. “The Seoul Global Center is doing lots of things for migrants, but they don’t know about the center, which I have to promote from now on as an official.”

Pham Thi Quynh Hoa, 31, who moved to Korea in 2006 from Vietnam, will monitor Seoul’s residential areas and help expatriates who struggle to settle down. Pham Thi said she hoped to see better career programs for migrant women in cooperation with Korean companies.

“Although there are multicultural centers and NGOs that provide career training programs for migrant women, the women often don’t get a chance to work in Korean companies after the training programs end,” Pham Thi said.

She added that immigrants from all education backgrounds, including those who earn their master’s or doctorate degrees in Korea, want more job opportunities in Korean companies.

“I hope to see the Seoul city government hold a job fair for these students as well,” she said.

Jin Hong, 33, a native of China, moved to Korea in 2005 to get her doctorate in business administration from Yonsei University. Jin will report complaints from expatriates to the government and teach multiculturalism in Korea in elementary schools. “The bureaucracy in China is so inconvenient, and I was surprised to see the efficiency in the Korean government by working here,” Jin said. “My parents in China also expressed delight for my job in the Seoul government.”

The women said they hoped they can help immigrants and expatriates who are wary of seeking out help.

“There are lots of expatriates who are unaware of Seoul’s government services and are afraid of contacting Korean officials,” Lee said. “I also want to inform expatriates of this while working here.”