For disabled children, a field of their own

For disabled children, a field of their own 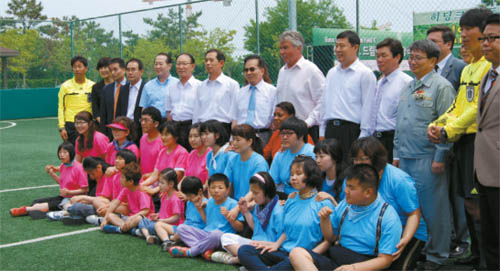 At the opening ceremony of Dream Field 5 in Ulsan, Guus Hiddink poses for a group picture before playing a football game with students from Ulsan Hyein School on June 14. Provided by Jennifer Park


ULSAN - A football field in this southeastern city has the typical sounds of children yelling and a football being kicked back and forth. However, there is also an unfamiliar, faint noise of bells ringing amidst the shouts.

This is a specially designed field for disabled children. With padded walls and footballs containing bells, the field is one of the five Hiddink Dream Fields that have been built all over the country.

Children with disabilities, including the blind, are now able to play a football within the walls surrounding the field while wearing head protection gear.

That pleases Park Ki-hoon, a physical therapist in Seoul, who recently heard about the new fields. Growing up blind in Korea, he said the only way he could play football, a sport that he and so many Koreans love, was to place rocks inside an empty soda bottle to use as a ball.

When the bottle was kicked, players would hear the rocks and use the sound to find the “ball.”

“We used to play with the bottles at the local park,” said Park in a phone interview. “Blind people having a method of playing football is something I thought about a lot.”

Now, blind children do not have to go to such extremes to play a sport that simply requires a ball and a goal for most people.

The fields are thanks to Guus Hiddink, the former Korean national football coach who is still hailed as a national hero for leading the team to the semifinals during the 2002 Korea-Japan World Cup.

Hiddink, who came to the field’s ribbon-cutting ceremony, said he had been trying to give back to a country that has given him so much by providing Korea’s disabled children with the chance to play football. Because of the lack of attention given to blind children, Hiddink has made it his goal to raise awareness on helping disabled children develop.

With the International Blind Sport Federation - the worldwide body for blind sports - having only been founded in 1981, sports programs for the visually impaired are in greater need.

A program of the Guus Hiddink Foundation, the Hiddink Dream Field project builds football fields that provide a safe environment for sight-impaired children, but are open to children with other disabilities as well as underprivileged children.

With the help of his girlfriend, Elisabeth Pinas, Hiddink established his foundation in 2003 to provide disadvantaged and disabled children with more opportunities to develop themselves and improve their lives.

“In the beginning, it was not meant to be just for blind people, but it began to lean that way through the help and ideas of Sister Jane Ann, the director of a blind people institution,” Hiddink said in an e-mail, adding that he’d like to see the fields also be used by other disabled or underprivileged children.

The foundation’s first two fields were built in Chungju, North Chungcheong, and Pohang, North Gyeongsang. Since then, there have been three more Dream Fields built in Suwon, Jeonju and Ulsan. The fifth and most recent field was officially opened on June 14 in Ulsan.

At the opening ceremony in Ulsan, blind students from Ulsan Hyein School played football with Hiddink with the help of their individual aides.

“It was so nice of Hiddink to make such a special field for us,” said Park Hae-jung, a sixth-grader who said she loves football, in a phone interview. “Although I am only partially blind, my completely blind friends really loved the opportunity to play football with Hiddink and would love to play with him again. We are very grateful toward the foundation for creating fields for blind children and it is something we will never forget.”

Thomas Park, the foundation’s managing director, said they hoped to build 11 fields in total, one for each city that hosted a World Cup game in 2002.

“We plan on creating the remaining Dream Fields in Busan, Gwangju, Incheon, Daejeon, Daegu and Seoul,” he said. “The fields in Busan and Gwangju are already in the process of being built and should be completed before the end of this year.”

Hiddink’s foundation has been able to create the specialized football fields with support from sponsors, such as Papa John’s Pizza and Nike Korea, as well as the Kids and Future Foundation.

“Once all of the fields are completed, [the foundation] intends to have a nationwide tournament with blind players from all over Korea,” Thomas Park said. “The winning team will go to the Netherlands and have the chance to play with blind teams there.”

The foundation is also a sponsor of Pohang’s Annual National Football Tournament for the Blind, where it presents the Hiddink MVP trophy to the best player.

Touched by the love shown from the Korean people, Hiddink said at the Ulsan ceremony that he wants to return the feelings by helping underprivileged and disabled children of Korea.

For Park Ki-hoon, that’s good news. “Since I wasn’t able to fully play football as a child, I think what Hiddink is doing for blind children today is such a great thing.”